Subprime 2.0: Lending a $1 Trillion to People With No Proof of Job or Income

SubPrime 2.0 is proving far worse than even we suspected.

If you’ve not been following this story, our view is that the auto-loan industry is Subprime 2.0: the riskiest, worst area in a massive debt bubble, much as subprime mortgage lending was the riskiest worst part of the housing bubble from 2003 to 2008.

In both instances, these lending industries were rife with fraud, terrible due diligence, and the like. So when the debt bomb blew up, they were the first to implode.

However, it would appear now that the Subprime 2.0 was even worse than Subprime 1.0 in terms of verifying income.

Santander Consumer USA Holdings Inc., one of the biggest subprime auto finance companies, verified income on just 8 percent of borrowers whose loans it recently bundled into $1 billion of bonds, according to Moody’s Investors Service.

The low level of due diligence on applicants compares with 64 percent for loans in a recent securitization sold by General Motors Financial Co.’s AmeriCredit unit. The lack of checks may be one factor in explaining higher loan losses experienced by Santander Consumer in bond deals that it has sold in recent years…

Santander only verified income on just 8% of autoloans. Put another way, on more than 9 out of every 10 autoloans, Santander didn’t even check if the person had a job.

However, the story also notes that even the more diligent lender AmeriCredit verified income on only 64% of loans.

So… two of the largest autoloan lenders basically were signing off on loans without proving the person even had a JOB either roughly half the time or roughly ALL the time.

Meanwhile, stocks are flirting with all time highs. 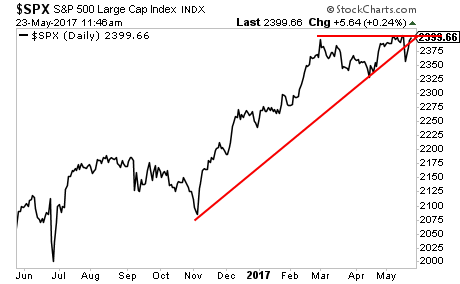 This entry was posted in Debt Bomb, stock collapse?. Bookmark the permalink.
This is the Last Bull Market Of Our Lifetimes