Fed Chair Janet Yellen just announced that the Fed will be kicking the $USD off a cliff.

She didn’t use those words, but the words she did use weren’t all that different.

But first a little context…

The fact is that the $USD has been falling steadily throughout 2017. At this time of this writing, it was down nearly 7% year to date. 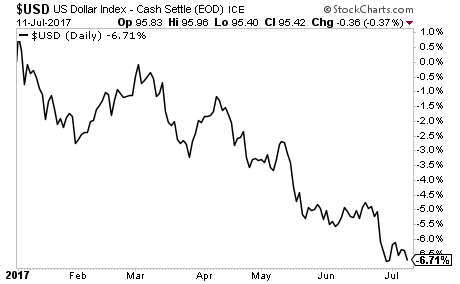 And this was during a period in which the Fed was RAISING interest rates multiple times!

Going into this meeting, the Yellen Fed was talking about aggressive tightening with multiple more rate hikes AND the Fed draining liquidity from the system via a shrinking of its balance sheet.

In this context, Yellen just made a complete 180 degree turn in front of Congress a few minutes ago.

And not just a little… I mean DOVISH.

A few of her key comments:

Put simply, the Yellen Fed is in fact just about done with tightening.

And the $USD is toast.

It’s time to get moving into inflation plays.

On that note, I recently told subscribers of our weekly Private Wealth Advisory newsletter about EIGHT inflation trades that could produce truly MASSIVE returns as the $USD collapses.

As I write this, all of them are moving higher. And as the $USD drops they could EASILY return TRIPLE DIGITS.

This won’t be anything new for us.

We didn’t use fancy investments we did this by trading ETFs and stocks without any leverage.

The out-performance continues in 2017…

And best of all, you can try Private Wealth Advisory for 30 days for just $0.98.

And I fully expect that when as inflation rips through the financial system, we’ll be seeing the single largest gains of my career!

However, if you want to get in on this, you need to move quickly, because our offer to try Private Wealth Advisory for 30 days for just $0.98 expires TODAY AT NOON.

This is it… no more extensions…

To lock in one of the last remaining slots…