In the last month, both Fed President Janet Yellen and ECB President Mario Draghi have issued somewhat hawkish statements, only to turn around within 48 hours and walk back their comments.

Again, two of the most powerful Central Bankers in the world couldn’t even last three days being hawks.

First was ECB President Mario Draghi, with claims that the ECB was considering gradually removing its stimulus programs.

European markets dived in response to this. 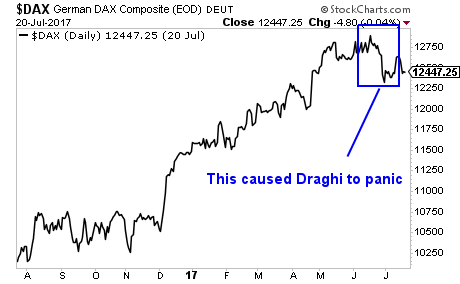 So Draghi sent his Number 2 guy on a PR campaign to assuage the markets that Draghi’s statements were being “misinterpreted.”

Yes… Draghi couldn’t even handle 24 hours of selling.The markets didn’t even drop 3% and he hit the “PANIC” button.

Just what does this guy know about the financial system that makes him unable to stomach a single DOWN day?

Then came Janet Yellen, suggesting that the Fed would be engaging in multiple more rate hikes and shrinking its balance sheet this year… only to turn around a few days later and deliver some of the most dovish testimony to Congress in Fed Chair history.

Yellen completely contradicted all of her earlier statements, claiming that the Fed was just about done with its rate hikes AND that it would not use its Balance Sheet reduction to drain liquidity from the system.

She couldn’t stomach even two days of the market correcting. 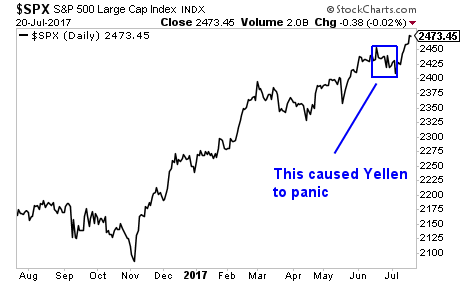 Again, what do these these people know about the financial system that they’re this terrified of the markets dropping for just a few days?

Could it be that they know that the market is in fact on VERY thin ice… and that another Crisis, even larger than 2008, is on the horizon? 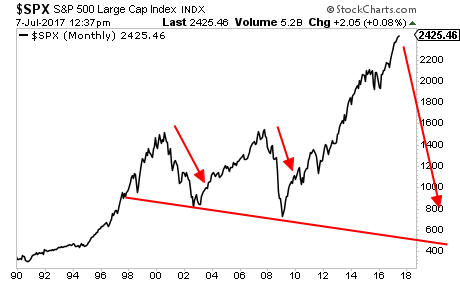 Today is the last day this report is available to the general public.