The following is an excerpt from our weekly investment service, Private Wealth Advisory.

A truly massive scandal is brewing in Big Tech.

This scandal concerns the fact that 60% of advertising “clicks” are in fact NOT coming from humans; they are generated bots or automated algorithms that don’t buy anything. EVER.

If you don’t believe me, and think I’m just making this up, consider what Keith Weed had to say last month.

Weed is head of Marketing for the consumer goods giant Unilever. In this role, he oversees a marketing budget of $8+ BILLION per year. And here are his statements on the impact of bots in digital advertising.

With $8.4 billion in annual ad spend, the advertising industry pays attention when Unilever is unhappy. During the Cannes Lions Festival of Creativity, Unilever’s chief marketing and communications officer Keith Weed outlined the three concerns that “keep him up at night.”

“If you don’t have your ad viewed, you are dead,” Weed told a Cannes audience on Wednesday.

He wants advertisers to “join up the dots in the digital industry.” As Weed sees it, this ecosystem is corrupted. Some 60% of traffic online is bots. “We want to buy eyeballs of viewers not bots,” says Weed. “If it is too good to be true, it probably is.”

The Tech Giants, Facebook and Alphabet (formerly Google), make the bulk of their money by charging advertisers a certain amount for every click the advertisers’ ads receive online.

So if 60% of ALL AD CLICKS are in fact BOTS, not HUMANS, the reality is that these ad prices are in fact MASSIVELY overstated.

Again, if you think I’m making this up, consider that another consumer goods giant, Proctor and Gamble cut its online marketing budget by $100 million and found… ZERO IMPACT ON GROWTH.

Procter & Gamble Co. said that its move to cut more than $100 million in digital marketing spend in the June quarter had little impact on its business, proving that those digital ads were largely ineffective.

Almost all of the consumer product giant’s advertising cuts in the period came from digital, finance chief Jon Moeller said on its earnings call Thursday. The company targeted ads that could wind up on sites with fake traffic from software known as “bots,” or those with objectionable content.

Again, Proctor and Gamble cut online advertising by $100 million and had ZERO impact on its results.

These are two massive companies both of which spent BILLIONS in advertising. And both of them are stating point blank that the value of digital advertising via companies like Facebook and Alphabet is MASSIVELY overstated.

What happens if these companies have to begin accurately pricing their ads? 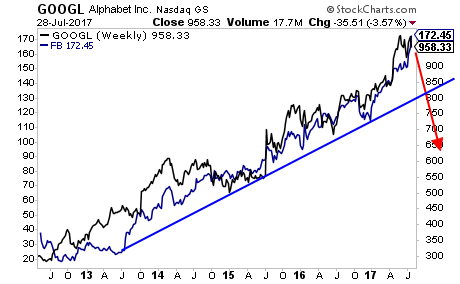 For more insights that can help you see serious returns from your investments, join our FREE daily e-letter, Gains Pains & Capital.

Every weekday you’ll receive our research reports before the market’s open.

In the last 6 months we’ve called the massive sell-off in the $USD, the out-performance by Emerging Markets, and more.

To join us, swing by: https://gainspainscapital.com/