Former Central Banker Comes Clean: The Bond Bubble is About to Burst

When they are working at a Central Bank, they never see financial problems, even if said problems are both MASSIVE and obvious.

As Fed Chair in 1999, Alan Greenspan claimed it was impossible to know if stocks were in a bubble … when stocks were in their single largest bubble in 100 years.

The next year, the market crashed.

As Fed Chair in 2007, Ben Bernanke claimed the subprime mortgage meltdown was “contained” and the effects would not “spillover” into the economy.

The next year the market crashed as the economy imploded.

And this year, Fed Chair Janet Yellen announced that there wouldn’t be another financial crisis in our “lifetime.”

We’ll see what comes next year.

Actually, we KNOW what’s coming, because for whatever reason, as soon as a Central Banker leaves the Fed, he or she suddenly changes their tune and starts telling the truth.

Former Federal Reserve Chairman Alan Greenspan issued a bold warning Friday that the bond market is on the cusp of a collapse that also will threaten stock prices.

In a CNBC interview, the longtime central bank chief said the prolonged period of low interest rates is about to end and, with it, a bull market in fixed income that has lasted more than three decades.

“The current level of interest rates is abnormally low and there’s only one direction in which they can go, and when they start they will be rather rapid,” Greenspan said on “Squawk Box.”

Greenspan’s had a decent record of honesty in the last few years, noting that excessive debt is the root of the financial system’s and that the reintroducing the Gold Standard would solve many of our current problems.

Again, the former Fed Chair seems to have “got religion” when it comes to finance.

And he’s now issuing a major warning that the bond market is in serious trouble.

He’s not wrong either. Globally the Bond Bubble has reached truly astonishing levels. The world has added $68 TRILLION in new bonds to the debt markets since 2007.

As a result of this, today the world’s Debt to GDP ratio is s staggering 327%. 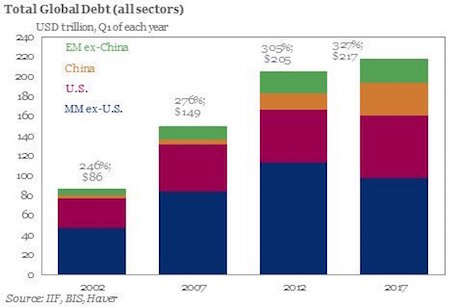 All of this new was issued based on assumptions that interest rates would remain at or near ZERO. So what happens to all this debt when yields start rising, bond payments increase, and borrowers start defaulting? 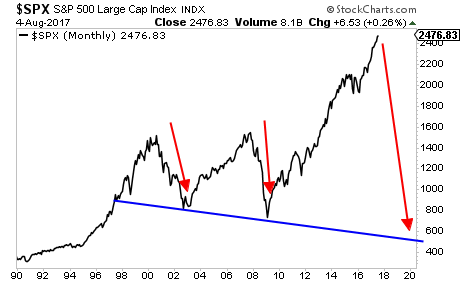 We are giving away just 99 copies of this report for FREE to the public.