Another Financial Elite Goes on Record About the Bubble

This week, another financial elite, Jamie Dimon, CEO of JP Morgan, has said the same thing.

“I do think that bond prices are high,” the chief executive officer of JPMorgan Chase & Co. said Tuesday in an interview on CNBC. “I’m not going to call it a bubble, but I wouldn’t personally be buying 10-year sovereign debt anywhere around the world.”

This would be an ASTONISHING admission from ANY bank CEO. But coming from the CEO of JP Morgan, the single largest bank in the United States, it is truly incredible.

As current CEO, Dimon has to be cautious in his statements (hence why he refused to outright call bonds “a bubble”). But he is openly admitting that when it comes to his PERSONAL capital, he wouldn’t touch 10-year SOVEREIGN bonds anywhere in the world.

Why is this a big deal?

Because sovereign bonds are the BEDROCK of the entire global financial system. They are the “risk-free” rate against which all risk assets are priced.

So if sovereign bonds are in a bubble, every asset under the sun is in a bubble.

Think what happened to Greece in 2010… for around the world.

On top of this, the bond bubble is bigger than anything the world has ever seen. The housing bubble was about $14 trillion in size. This bubble is north of $100 TRILLION. 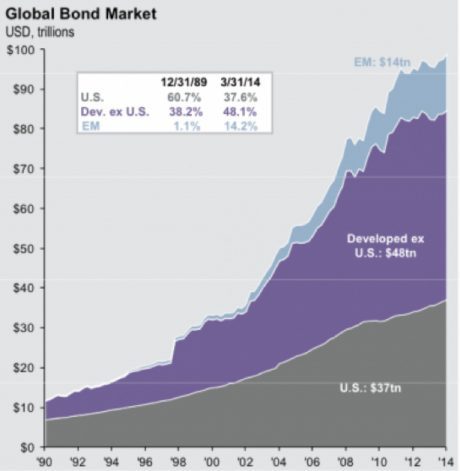 As I write this there are just 97 are left.