The Fed July FOMC minutes, that were released last week, were nothing short of extraordinary. However, to fully appreciate just what the Fed admitted, we first need a little background.

From November 2016 until June 2017, the Fed was pushing a hawkish agenda. The running mantra at this time was that the Fed would raise rates 3-4 times in 2017. As the year progressed, the Fed also began talking about shrinking its balance sheet.

The Fed’s justification for these moves was that inflation was rising and the economy was strong enough to tolerate these moves. As a result the Fed hiked rates twice, first in March and then again in June 2017.

Then, in late June, the Fed suddenly did a complete 180, stating that it was just about done with rate hikes. Moreover, the Fed stated that shrinking its balance sheet would not remove liquidity from the system.

Put simply, the Fed switched from hawkish to completely dovish in the span of two weeks.

This, in of itself, was bizarre. The Fed’s entire purpose is to maintain financial stability. How it could possibly claim it is doing this by changing its entire strategy suddenly and without warning is beyond me.

And then we get last week’s release of the Fed July FOMC minutes.

The minutes were complete insanity. I realize that many commentators are trying to argue that the Fed was hawkish. But it wasn’t. The Fed was in total chaos.

Let’s take the example of inflation.

According to the July FOMC statement…

Like I said, the Fed is in total chaos.

There was a similar lack of unity of just about everything: the labor market, lending risks at banks, Federal Government policy, etc.

However, there was one line in particular that stood out.

However, most participants thought that the framework remained valid, notwithstanding the recent absence of a pickup in inflation in the face of a tightening labor market and real GDP growth in excess of their estimates of its potential rate.”

The Fed admits here that the labor market is tight, real GDP growth is stronger than Fed estimates, but inflation is failing to pick up.

This is astonishing. According to the Fed’s dual mandate, the Fed is supposed to seek maximum employment while stabilizing prices and moderating long-term interest rates.

In plain English, the Fed is supposed to pursue solid economic growth, with maximum employment, while keeping inflation on an even keel.

Today the Fed is finding that employment is very strong, the economy is relatively strong, and inflation is weak.

According to all Fed models this is impossible.

This is why the FOMC minutes claimed many members thought inflation had dropped due to “idiosyncratic factors.” The alternative reality (that the Fed has no idea what’s going on) is too disturbing to admit publicly.

Unfortunately, that alternative reality is in fact REALITY. The Fed no longer has a clue what’s happening in the financial system. This is because the Fed cannot actually generate economic growth, it can, at best create massive bubbles.

Speaking of which, what do you think will happen to our latest bubble when investors figure out the Fed’s lost control? 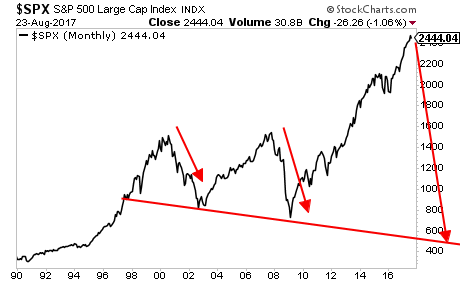 On that note, we just told subscribers of our Private Wealth Advisory about FOUR trades that will pay out MASSIVE returns when the market breaks.