The Single Most Important Chart in the World is Breaking Down

While everyone continues to focus on stocks, a much larger, far more important situation is brewing in the single most important asset class in the world.

That situation involves the US Dollar ($USD).

While CNBC and the financial media love to talk about stocks, the reality is that stocks are actually one of the smallest asset classes in the world.

Globally, the stock market is around $70 trillion.

Bonds, by way of contrast, are over $217 trillion.

Currency markets dwarf even this. While it’s impossible to know their full size (every currency trade involves two currencies so the net size is impossible to measure), we do know that the currency markets trade an astonishing $4-$5 trillion per day  (by way of contrast, the NYSE trades less than 4% of this per day).

Put simply, the currency markets are the largest, most liquid markets in the world. So when a major change occurs, it hits these markets first.

On that note, the single most important currency in the world, the US Dollar ($USD) is imploding.

Thus far in 2017, the greenback has fallen like a brick. As I write this it’s down 9% this year alone. 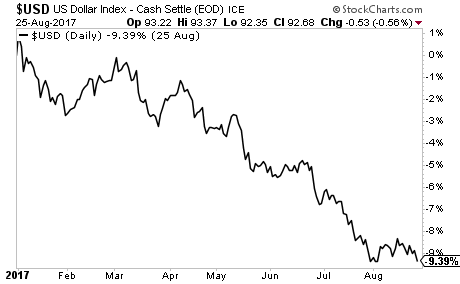 Far more importantly, this collapse has meant the $USD breaking below CRITICAL support. It will now begin unwinding its entire bull market from 2014. 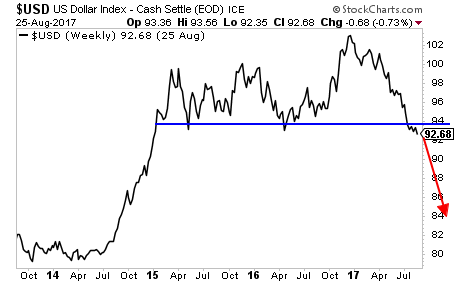 This is going to be like rocket fuel for inflation trades. Gold and Silver will be going to new highs. And smart investors will use this trend to make literal fortunes.