The Single Most Important Chart For Gold and Gold Miners Investors

The next leg up for Gold is officially here. And it’s going to be the big one.

Gold has broken out of the mother of all triangle patterns established by the long-term bull market trendline established in 2006 and its seven-year descending line from the 2010 peak. 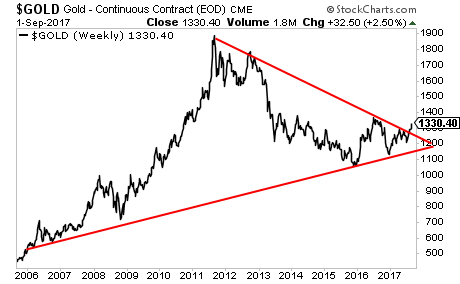 Of course, things won’t be moving in a straight line from here. But the upside target for this formation is well north of $3,000 in the next few years (again, remember this formation took over a decade to form). But the picture is crystal clear.

We get confirmation of this from the Gold Miners to Gold ratio (GDX: GLD). Think of this as a measure of Gold beta as Gold Miners typically lead the precious metal during major moves.

With that in mind, consider that the Gold Miners to Gold ratio has broken out of a bullish falling wedge pattern running back in 2007. This is MASSIVELY bullish and predicts the ratio moving to 0.45. 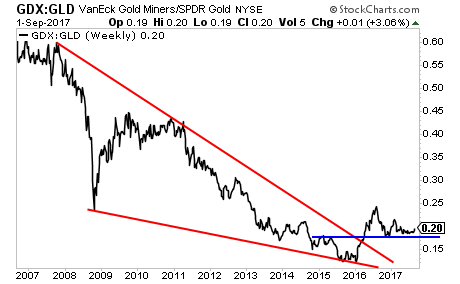 Put another way, Gold is going to be moving sharply higher. And Gold Miners are going to be going through the ROOF. This formation predicts Gold well north of $3,000 with Gold Miners at new highs for this bull market.