Is the Fed About to Burst the Largest Debt Bubble in History?

The Fed meets today to discuss whether or not to begin shrinking its balance sheet.  The financial media informs us that this is the single most important Fed meeting in years and that its coming announcement is a game-changer.

Give me a break.

The Fed will NEVER let its balance sheet shrink to a relatively normal level. The simple fact is that the ENTIRE move in the markets since 2008 has been induced by the Fed and other Central Banks creating a bubble in bonds.

This bubble was fueled by years of ZIRP/ NIRP and over $14 trillion in QE. The Fed might have stopped QE temporarily, but globally Central Banks are still pumping nearly $180 billion into the markets every single month.

The end result of this is that today, the world is in the single largest debt bubble in history. Collectively, the world’s Debt to GDP ratio is now well over 326%. 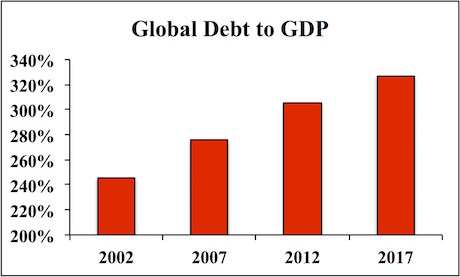 This marks the THIRD gigantic debt bubble of the last 18 years. And when it bursts, Central Banks will be cranking up the printing presses to truly NUCLEAR levels of QE to deal with it.

This is going to send inflation trades, particularly Gold, through the roof.