Did the Fed’s #2 Quit to Avoid Blame for the Coming Inflationary Storm?

Vice-Fed Chair Stanley Fischer recently resigned unexpectedly from the Federal Reserve. Many were left wondering why Fischer would give up his role as the Fed’s second in command, arguably the second most powerful Central Banking position in the world.

The current soft patch of inflation will not last, the No.2 official on the U.S. central bank said Wednesday.

“I still believe we will have higher inflation,” Fischer said, in an interview on Bloomberg TV.

With unemployment declining, wages will go up “at some stage,” Fischer said.

“You have to wait a long time, usually longer than you expected to wait for something to happen, but then, if it is a very basic force… it will show up,” Fischer said.

It’s not difficult to connect the dots here. The last time the US had a major inflationary spike (the 1970s) the head of the Federal Reserve at the time (Paul Volcker) was fired.

So was Fischer abandoning ship in anticipation of another similar disaster?

Consider that the $USD has already collapsed over 10% this year. And that’s before inflation even clears the Fed target of 2%. Indeed, the long-term chart is even uglier with the $USD looking to collapse in a horrifying spiral over the next 12 months. 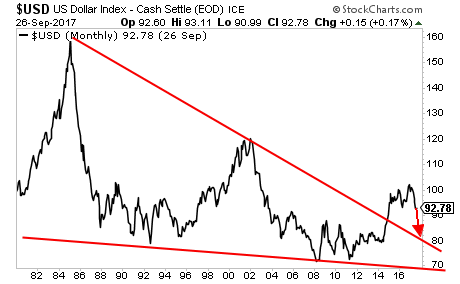 This is THE BIG MONEY trend today. Already the financial system is showing signs of it. And smart investors will use it to generate literal fortunes.