As you know, I’ve been very critical of the Fed’s inflation measures for years. The official inflation measure (Consumer Price Index or CPI) does a horrible job of measuring the actual cost of living for Americans.

I have long stated that this is intentional as the purpose of CPI is to hide the true rate of inflation so the Fed can paper over the decline in living standards that has plagued the US for the last few decades.

The Fed isn’t doing this out of ignorance, either. Back in 2002, Fed researchers actually reviewed  the usefulness of its CPI metric for forecasting inflation.

The results were not pretty. In fact, the Fed discovered that its official measures of inflation (CPI and PCE) do a horrible job of predicting future inflation.

So what does predict future inflation accurately?

I want you to focus on these two admissions:

1)   The Fed has admitted that its official inflation measures do not accurately predict future inflation.

Put simply, if you want to predict inflation well… you NEED to look at food prices.

This offer expires tonight at midnight.

With that in mind, food inflation is on the rise. As a whole, Food and Beverage inflation has broken out of a descending wedge pattern (blue lines) in the context of a massive wedge triangle pattern (purples lines). We’re heading for a test of the upper purple line shortly. 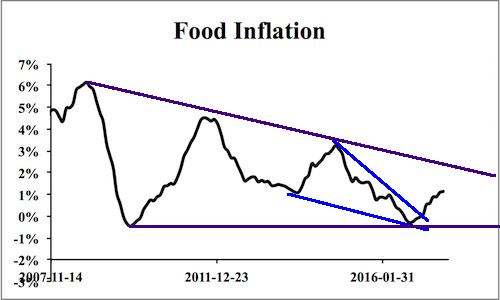 Put simply, inflation is rising. And at it is going to be getting worse in the weeks and months ahead. Why do you think the $USD has dumped 10% this year already?

This is THE BIG MONEY trend today. And smart investors will use it to generate literal fortunes.