The Fed is no longer even trying to hide the fact that it WANTS inflation.

In the last month, the Fed has attempted to feign ignorance about the true nature of inflation. Fed Chair Janet Yellen even went so far as to claim the Fed doesn’t “fully understand” inflation during a Q&A session in September.

The Fed “understands” inflation just fine, it just chooses to feign ignorance so it can maintain a “gosh, we didn’t know!” attitude about the coming inflationary storm.

Evans, along with NY Fed President William Dudley, is the real “power behind the throne” for the Federal Reserve. Like Dudley, Evans is in charge of a branch of the Fed that is associated with one of the major financial centers of the US. In other words, he is a Fed President with close ties to the financial firms that call the shots for the US financial system.

This allows Evans to speak more bluntly than most Fed President. And when he talks, you know he is doing so with the full backing of the Chicago financial elite.

With that in mind, consider Evans’ recent statement on inflation.

Fed’s Evans: An increase in U.S. inflation is a priority

Chicago Federal Reserve Bank President Charles Evans said on Friday that the U.S. central bank’s priority must be to get inflation back to its 2 percent target…

“The first order thing for policy right now is to get inflation up to our objective,” Evans said at a financial literacy event in Green Bay, Wisconsin.

As we’ve already noted, the Fed is well aware that inflation is already well above its 2% target. But with the US financial system sporting some $60 trillion in debt total (including all sectors of the economy) the Fed has no choice but to keep “papering over” these debts. Small wonder then that even the Fed’s own “sticky inflation” measure has been rising steadily since 2010 and is already clocking in well over 2%. 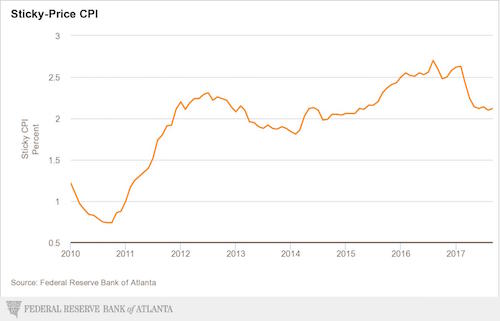 The time to prepare your portfolio for this is NOW before inflation truly gets out of control!

THAT’s the kind of potential we have with inflation in 2018.

Put simply, BIG INFLATION is the THE BIG MONEY trend today. And smart investors will use it to generate literal fortunes.