Another major economy is facing the ugly prospect of rising inflation.

A central theme in our analysis of The Everything Bubble is that Central Bankers are focused on only one thing: maintaining the bull market in bonds at all costs.

The reasons are as follows:

2)   With massive ownership of bonds thanks to over $15 trillion in QE, Central Banks are extremely exposed should bonds collapse (and yes, Central Banks can go bust).

On that note, China is the latest major economy to see its bond yields rise as inflation takes hold.  Yields on China’s 10-Year Government bond are breaking out to the upside as I write this. 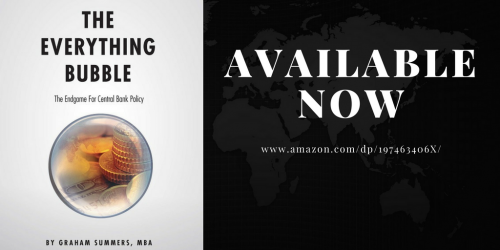 With China now experiencing higher bond yields (higher borrowing costs in the bond market), all FIVE of the world’s largest bond markets are warning of rising inflation: the US’s, Japan’s, Germany’s, and the United Kingdom’s bonds are all flashing “DANGER” with multi-year breakouts occurring in their 10-year bond yields.

The above chart is telling us in very simple terms: the bond market is VERY worried about rising inflation. And if Central Banks don’t move to stop hit now by ending their QE programs and hiking rates, we’re in for a VERY dangerous time in the markets.