And no one is talking about it.

The ECB proposed removing “deposit insurance” for bank deposits. Put another way, the ECB wants to make it so that if an EU bank fails, the individuals who keep their savings in the bank lose everything.

In a paper published on the European Central Bank’s Banking Supervision website, the ECB proposed the following:

‘covered deposits and claims under investor compensation schemes should be replaced by limited discretionary exemptions to be granted by the competent authority in order to retain a degree of flexibility.’

In legal terms, this means that the ECB wants to do away with deposit insurance entirely, Instead, the ECB proposes that should an EU bank fail, the amount of capital you can access would be both “limited” and at the sole discretion of an authority.

Let’s say you have €10,000 in a bank account at a bank that fails. According to the ECB’s proposal, if the monetary authority decides you should only get €1 back… that’s all you’re getting.

We covered the risk of “bail-ins” and other wealth confiscation schemes in our bestselling book The Everything Bubble: The Endgame For Central Bank Policy, and judging by this recent development, we’re much further along in the financial collapse than most realize.

Where are things going ultimately? The bottom chart tells us. 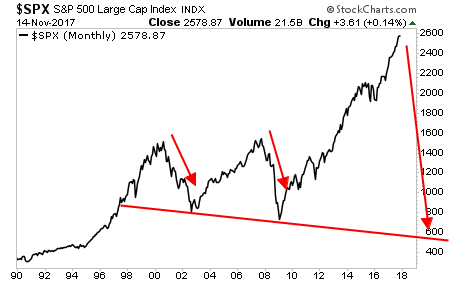 The time to prepare your portfolio for this is NOW before this hits truly gets out of control!

We have reopened this report to the public by one week based on what is happening in stocks today, but after that, we are closing the doors on this offer.