Remember how the Fed, ECB and others all claimed ZIRP and QE were about generating economic growth, making mortgages more affordable, and helping consumers?

Well, that was a gigantic lie. The truth is that every major policy employed by Central Banks since 2008 have been about one thing…

Governments around the world have used the bubble in bonds to finance their bloated budgets. If interest rates were anywhere NEAR normal levels, most countries would lurch towards default in a matter of weeks.

If you think this is conspiracy theory, consider that the European Central Bank openly admitted this in its semi-annual Financial Stability Review this week:

Even so, [the ECB] said that “higher interest rates may trigger concerns about sovereigns’ debt-servicing capacity,” and noted that “distrust in mainstream political parties continues to rise, leading to fragmentation of the political landscape away from the established consensus.”

In plain speak, the ECB is admitting here that if rates were to rise, the financial world would quickly realize that most countries couldn’t finance their debt payments. Indeed, the five largest economies in the world are all near or above Debt to GDP levels of 100% 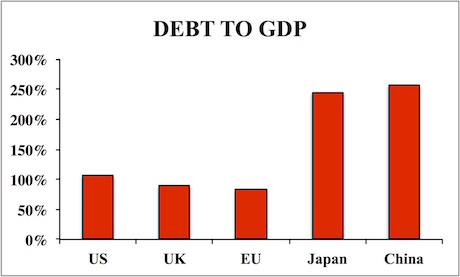 As I explained in my bestseller, The Everything Bubble: the Endgame For Central Bank Policy, the bubble in bonds is what finances this entire mess. It’s what lets the political class continue to spend money the government doesn’t have. And it’s why the entire financial system is now in a bubble.

Remember, sovereign bonds are the bedrock for the current fiat-based financial system, so when they go into a bubble, EVERYTHING goes into a bubble, as all risk assets adjust to ridiculously cheap interest rates.

This is why I coined the term The Everything Bubble in 2014. It’s also why I wrote a book on this issue as well as what’s coming down the pike: because when this bubble bursts (as all bubbles do) the policies Central Banks employ will make those from 2008-2015 look like a cakewalk.