Greenspan and the Myth of “Inflation is Too Low”

The Fed concludes its final FOMC meeting of the year today.

The entire financial world expects the Fed to raise rates a final time. This will mark the fifth rate hike since December 2015, and the fourth of the last 12 months.

Throughout this time period, the Fed has routinely stated that it is confused as to why inflation is “too low.”

Inflation is not too low. The method the Fed uses to measure inflation is intentionally incorrect. As a result, the official inflation numbers reflect whatever the Fed wants, as opposed to reality.

Alan Greenspan devised this entire gimmick back in the 1990s. At that point, the amount of debt in the US financial had already become a systemic issue. 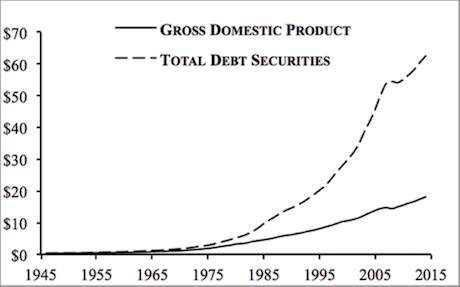 So Greenspan opted to “paper over” this fact via inflation… hoping that by aggressively devaluing the US Dollar he could keep this game going.

The only problem as far as the Fed was concerned was that the inflation numbers would reveal the Fed’s strategy. So Greenspan started tinkering with how the Fed measured inflation, removing various components (food and energy) and tweaking things so the Fed would no longer measure the cost of maintaining the same quality of life.

Greenspan hoped understating inflation publicly he would give him the cover he needed to pursue an aggressive devaluation of the US Dollar. The flip side of this was that the Fed would begin intentionally creating asset bubbles by maintaining loose monetary policy ad infinitum. 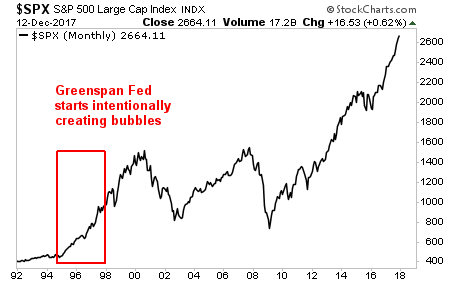 The late ‘90s was the Tech Bubble.

When that burst in the mid-‘00s, the Fed created a bubble in housing.

When that burst in ’08 the Fed created a bubble in US sovereign bonds or Treasuries.

And because these bonds are the bedrock of the US financial system, the “risk-free rate” of return against which ALL risk assets are valued, when the Fed did this it created a bubble in EVERYTHING.

That bubble is now beginning to burst. And ironically it is inflation (which the Fed claims is too low) that will do it.

It will take time for this to unfold, but as I recently told clients, we’re currently in “late 2007” for the coming crisis.