Is the Bond Market About to Call the Fed’s Inflationary Bluff?

Perhaps the single biggest development this year, as far as the markets were concerned, was the Fed admitting on the record that it has no idea what is going on with inflation.

This represents a kind of endgame for the Fed. Since the early ‘80s, the Fed has been actively understating inflation via a variety of gimmicks.

Then in 1998, the Fed started playing around with “hedonics” (think food and energy prices). The Fed claimed that the goal was to somehow balance the deflationary forces of technology vs. the inflationary forces of hedonics items… but the reality was that this was just another gimmick to understate inflation.

Then, finally in 1999, the Fed introduced the idea of “substitutions.” Here again the Fed claimed it was trying to get an accurate read on inflation (the Fed argues here that if a consumer cannot afford steak anymore, the fact he or she can substitute hamburger indicates his or her quality of life is roughly the same as before).

And once again the goal was to understate inflation.

I realize this is getting a bit complicated, so let’s put this in simple terms…

1)   Since the early ‘80s, the Fed has been employing various gimmicks to hide the real rate of inflation.

2)   Doing this allowed the Fed to overstate GDP growth while understating the true decline in incomes/ quality of life for most Americans.

This game worked for a while, but this year the whole scheme crashed into a wall when the various gimmicks resulted in data that made no sense what-so-ever.

At a time when the NY Fed’s UIG inflation measure and the Atlanta Fed’s “sticky inflation” measure, showed inflation at 2.8% and 2.1% respectively, the Fed’s official inflation measures (CPI and trimmed PCE) were clocking in at 1.7% and 1.4%,

The Fed’s Board of Governors had a choice here:

2)   Act surprised by the official rate being so low and claim it’s an anomaly.

The Fed went with #2 in what was one of the most insane Fed statements ever. According to the Fed’s July FOMC statement…

Put simply: the Fed admitted that it no longer had a clue what was going on with inflation. It has since maintained this “who knows!” shtick (I note that Fed Chair Janet Yellen, in last week’s conference stated that the Fed’s understanding of inflation is “imperfect.”)

As I explain in my bestselling book The Everything Bubble: the Endgame For Central Bank Policy, US sovereign bonds (also called Treasuries) trade based on inflation expectations.

When the Bond Bubble bursts, the EVERYTHING bubble follows.

Well, guess what? The yield on 10-Year US Treasuries is spiking, having broken above its 20-year trendline. 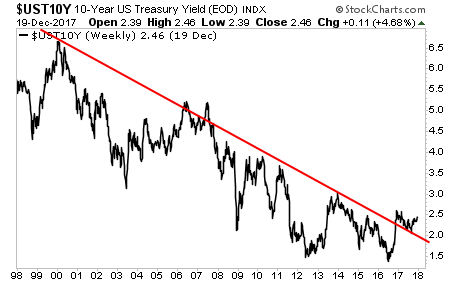 What’s coming will take time for this to unfold, but as I recently told clients, we’re currently in “late 2007” for the coming crisis. The time to prepare for this is NOW before the carnage hits.