June of 2017 marked the date at which the inflation genie was let out of the bottle.

That was the month that:

1)   Fed Chair Janet Yellen began the process through which the Fed publicly admitted that it has no clue about how inflation really works.

2)   The Bank of Japan (BoJ) announced it would continue its massive QE program despite clear evidence Japan’s economy was out of trouble.

3)   The European Central Bank (ECB) affirmed it would continue its own massive QE program despite clear evidence that the EU economy was stable.

The markets “took the hint.” From July 2017 onwards, commodities (which usually rally hard during periods of higher inflation) outperformed the S&P 500 by a wide margin (with a brief exception in early December). 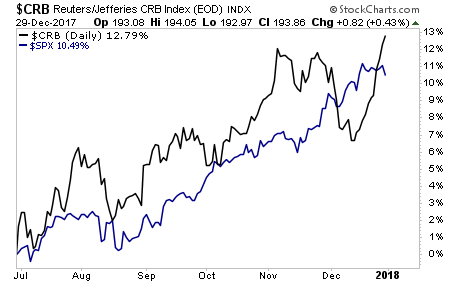 Put simply, starting in June of 2017, the markets began to adjust to the fact that BIG inflation was on the rise.

As I explain in my bestselling book The Everything Bubble: the Endgame For Central Bank Policy, US sovereign bonds (also called Treasuries) trade based on inflation expectations.

When the Bond Bubble bursts, the EVERYTHING bubble follows.

Well, guess what? The yield on 10-Year US Treasuries is spiking, having broken above its 20-year trendline. 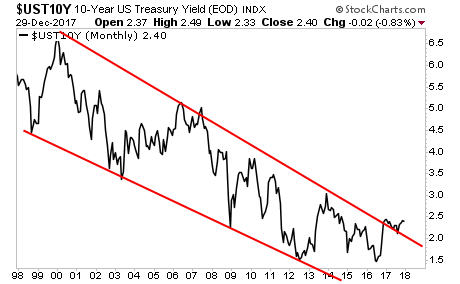 What’s coming will take time for this to unfold, but as I recently told clients, we’re currently in “late 2007” for the coming crisis. The time to prepare for this is NOW before the carnage hits.

issues as well as what’s to come when The Everything Bubble bursts.