Bond Yields Are Rising Again… Stocks Are on Thin Ice

The financial media is awash with claims that Gary Cohn’s resignation as Chief Economic Advisor is triggering a market collapse.

While it’s true that a market collapse is starting again, it has nothing to do with Gary Cohn.

Because Gary Cohn first wrote a resignation letter back in August 2017 in the wake of the Charlottesville mess… and stocks exploded higher beginning one of their greatest rallies in history. 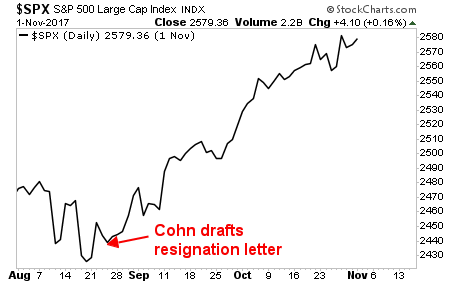 Put simply: stocks are not diving because of Gary Cohn; they are diving because the issue that first triggered the market meltdown in early February (rising rates) continues!

Remember, as I explained in my best-selling book The Everything Bubble: The Endgame For Central Bank Policy, the ENTIRE market rally following the 2008 Crisis was triggered by the Fed creating a bubble in US Sovereign Bonds, also called Treasuries.

Because our current financial system is based on debt, these bonds represent the bedrock for the entire financial system, with their yields representing the “risk free rate” of return against which EVERY asset class on the planet is priced.

As a result of this, when bond yields begin to rise, EVERY ASSET CLASS in the system (including stocks) adjusts accordingly.

In chart terms, THIS was what triggered the first leg down during this market collapse. 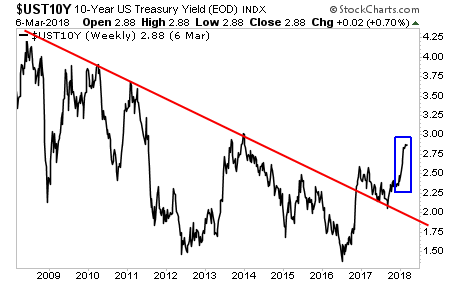 And guess what? Bonds yields bounced off support and are already turning back up again. 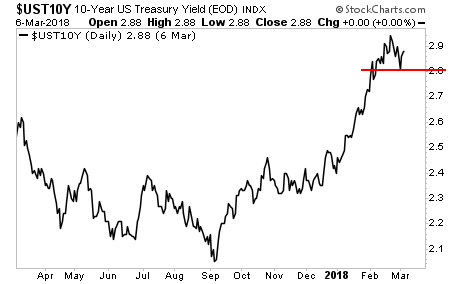 Which means… stocks will soon be revisiting the February lows. 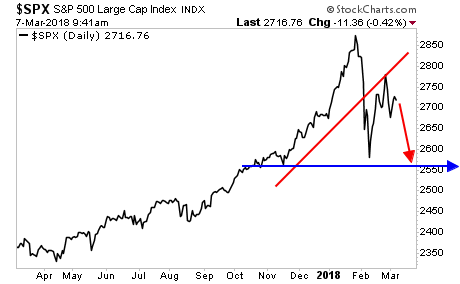 We’ve extended our offer to download this report FREE by one week. But this week is the last time this report will be available to the general public.