Below is a note posted to our clients before the market’s open on Monday. To join our list and receive our exclusive insights, go to:

If you want to make money in the markets this week, the first thing you need to understand is that there is NO trade war.

I know that every single headline and “guru” is talking about a trade war as if it’s a guaranteed apocalyptic scenario. It isn’t. This is just misguided hysteria.

But what about all the tariffs? The hundreds of billions of dollars worth of tariffs that are hurting China and the US and will lead us all to an economic crisis?

All of the tariffs that have been announced thus far don’t go into effect until MAY at the earliest. The big $100 billion one won’t hit until early June. And even Trump’s trade guy has implied this is a soft deadline.

As for the horrible steel and aluminum tariffs that have already been put into effect, Trump exempted FOUR out of the five largest US trade partners from the deal. And China, the sole trade partner that was punished is responsible for… wait for it… a WHOPPING $1.9 billion in steel trade.

Again, there is no trade war. This is a NEGOTIATION process that will be resolved LONG before any real tariffs of any real significance go into effect.

And the markets know it.

The currency markets are smarter, more liquid, and more sensitive to systemic changes than stocks. The entire stock market is in the ballpark of $75 trillion.

With that in mind, take a look at the $USD: Yen pair, arguably the single most important currency pair in the world. This is the “Yen carry trade” and it, better than almost anything, indicates the degree of global liquidity in the system,

Since Trump announced the steel and aluminum tariffs on March 1, 2018, and the US and China have gone back and forth threatening ever larger tariffs on each other, this pair is… FLAT. 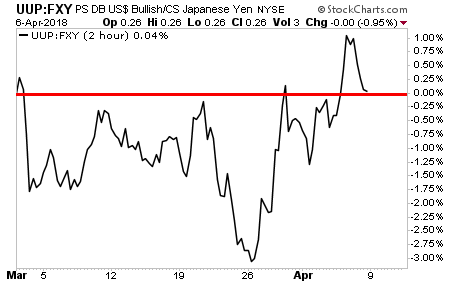 Indeed, this currency pair ERASED ALL OF ITS LOSSES starting two weeks ago.

You think the currency markets might know something that the “gurus” don’t?

Yep. They know that the big bad trade war is going to be resolved and trade and liquidity will continue just fine.

Which means… stocks are about to erupt higher in a “relief rally.” And based on the fact the ENTIRE WORLD is shorting stocks right now, I believe we will hit NEW ALL TIME HIGHS in a final blow off top sometime this summer. 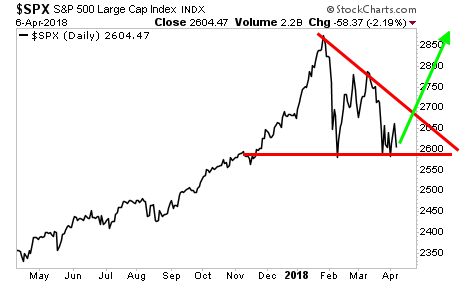 This is just another humble reminder that the market knows more than most experts. It always pays to pay attention to price!