The Bank of Japan Has Nationalized All Risk Assets. The Fed/ ECB /SNB / BoE are Next

Once a Central Bank begins to employ ZIRP and QE for years at a time, there is no going back. If you don’t believe me, take a look at Japan.

As I outlined in my book The Everything Bubble: the Endgame For Central Bank Policy, Japan is ground zero for Central Bank monetary insanity. The Fed first employed ZIRP and QE in 2008. Japan went to ZIRP in 1999. It launched its first QE program in 2000.

And it never looked back.

There were brief periods in which the Bank of Japan would NOT employ QE. But as soon as Japan’s economic data turned south… you guessed it… MORE QE… and not for a month or two… this has been going on for 18 years.

The end result is that today the Bank of Japan’s balance sheet is roughly the size of the country’s GDP. 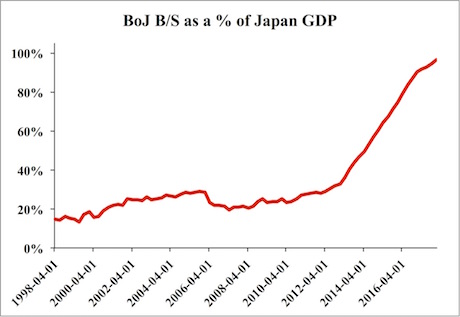 Our options trading system is on a HOT streak, having locked in SEVEN double digit winners in the last four weeks.

The BoJ now owns MORE Japanese stocks than foreign investors do. It is a top shareholder in 90% of the Nikkei’s largest 225 companies and owns an astonishing 74% of Japanese ETFs.

Worst of all… this is where the Fed, ECB, BoE, and SNB will all be heading as soon as the next crisis hits.

I realize I probably sound insane saying this, but consider the following…

Back in 2003, if someone had suggested the Fed could cut rates to ZERO and hold them there for SEVEN YEARS while engaging in over $3.5 TRILLION in QE, they (the person suggesting this as a possibility) would have been called insane.

Fast forward to today, and here we are, with the Fed having only just raised rates to 1.75% (roughly where rates usually BOTTOM when the Fed eases during a recession) and with a balance sheet the size of Germany’s GDP.

And mind you, the next crisis is going to be even bigger than that of 2008.

The 2008 crisis was triggered by debt deflation in mortgage-backed securities… a relatively junior level debt instrument.

The coming crisis will be triggered by debt deflation in SOVEREIGN bonds… the SENIOR-most debt instrument on the planet and the bedrock of the current financial system.

It will take time for this to unfold, but as I recently told clients of my Private Wealth Advisory newsletter, we’re currently in “late 2007” for the coming crisis.

This is the BLOW OFF TOP stage. And we all know what’s going to follow.