Inflation enters the economy in stages. It’s not as though the Fed begins to print money and POOF! inflation appears. It takes time.

The first stage occurs in the manufacturing/ production segment of the economy when you see producers suddenly paying more for the raw goods and commodities they use to manufacture/ produce finished goods.

You can see this development in the chart below. The highlighted periods featured times in which Producer Prices for commodities or raw goods spiked approached record highs. 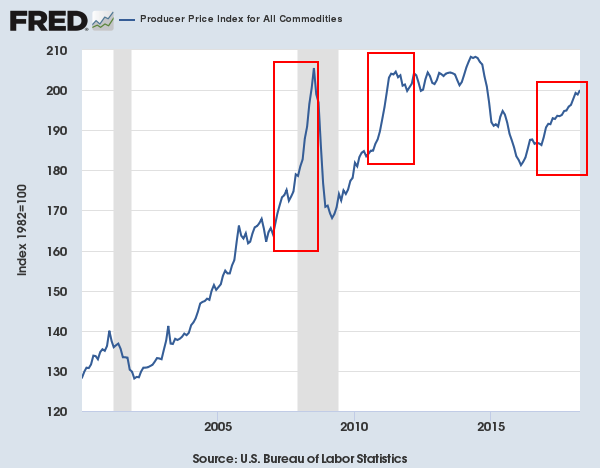 One or two months or higher Producer Prices for commodities or raw goods is no big deal, but once you’re talking 6-8 months of steadily rising Producer Prices it’s significant. At that point manufacturers/ producers have to start raising the prices of finished goods or face shrinking profit margins.

At that point you move into the second stage of inflation. That didn’t happen in 2008 (the deflationary crisis removed the inflationary stresses). But it did happen in 2011. And it’s happening again now.

When the price of finished goods begins to rise, you’re in stage 2 for inflation. Again, this can be temporary, but if you have multiple months of this, you’re talking about a significant development.

Bear in mind, that phase 2 can happen in different ways. Management at companies don’t just say “raise the price now!” Instead they can do different things such as charge the same amount for less of a finished product/ shrink the size of the container. This is called shrinkflation.

Another strategy is to start using cheaper/ lower quality raw goods (to reduce costs/ quality) while charging the SAME amount for the finished good. This too is inflation as the cost of the SAME item is MORE expensive, though it’s being masked because the QUALITY is LOWER and the price is the same.

You get the general idea.

I’ve marked periods in which “Stage 2” of inflation occurred in the last 10 years on the chart below. 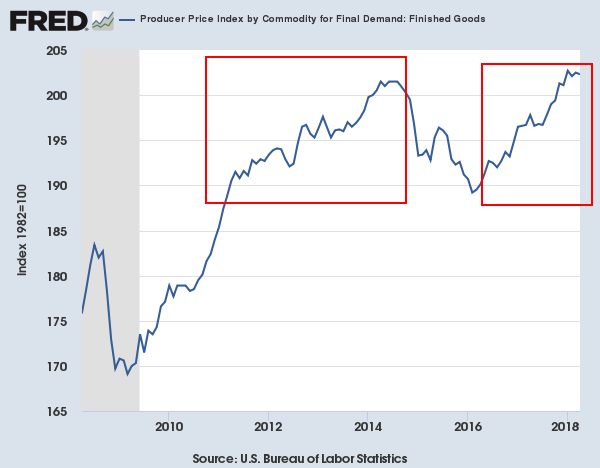 It’s HERE that inflation begins to appear in the economy. However, it doesn’t become a SERIOUS problem until you reach the point at which the price of finished goods remain elevated long enough that people start to demand raises/ higher wages to maintain their living standards.

THAT is Stage 3 for inflation… the inflaiton that most people think about when they use the word. And it marks when it’s fully seeped into the economy.

We are now hitting this stage.

You read that correctly… while the CPI and other inflationary measures show inflation only slightly above 2%, WAGES have been rising by over 2.5% year over year for months (since at least January 2018).

Put another way, “INFLATION” as most refer to it, is finally seeping into the economy. By multiple measures it’s already north of 2.5%… and the Fed is hopelessly behind the curve with rates at a mere 1.75%.

This is THE trend going forward for financial markets. And those who are well prepared for it will do extremely well.