The Fed Already Blew Up Emerging Markets… Are US Next?

Last week the Fed announced it intends to hike rates another two times this year, with three more hikes next year. The Fed also announced that it will continue to increase its QT program with the goal of eventually withdrawing $50 billion in liquidity per month, or some $600 billion per year.

The market didn’t like this announcement, with stocks in a sea of red. This has raised the question… “is the Fed going to trigger a market meltdown?”

How you answer that depends on who you ask. If you ask an investor in many of the emerging markets, the answer is… “The Fed already has.” The Emerging Market ETF is down 15% from its recent peak, while other specific emerging markets such as Brazil are down 20% year to date. 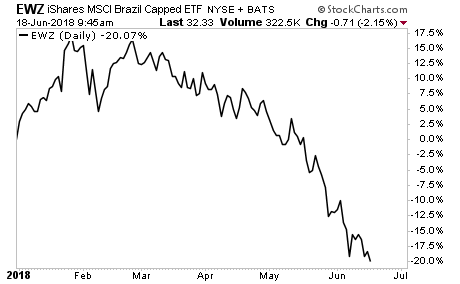 All of this can be squarely set on the Fed’s shoulders. Both the ECB and the BoJ are tapering their QE programs. The former will end its QE program in December, the latter… who knows? The point is, both are easing, while the Fed is hiking rates 3-4 times per year AND withdrawing liquidity to the tune of $30 billion per month.

My point is that while most Central Banks are easing, the Fed is TIGHTENING as if it’s dealing with runaway inflation. This is forcing the US Dollar higher which in turn is putting the highly $USD leveraged system under duress. 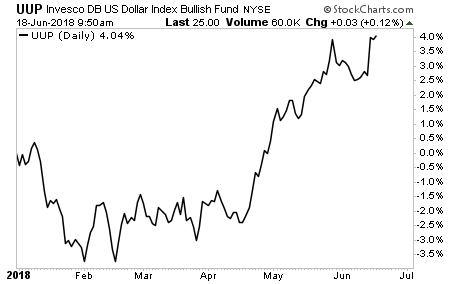 If the Fed doesn’t figure this out soon, we could very well see the carnage of the Emerging Markets space spread into the S&P 500. I remain VERY bullish in the intermediate term, but the Fed could make things NASTY in the short-term if it doesn’t fix this,

We’ve extended our offer to download this report FREE by one week. But this week is the last time this report will be available to the general public.