Copper Has Signaled That the “Election” Growth Rally is OVER!

The markets are now screaming at the Fed that it needs to “back off.”

Copper is widely called “Dr. Copper” due to its close association with economic growth. With that in mind, take a look at the chart below. 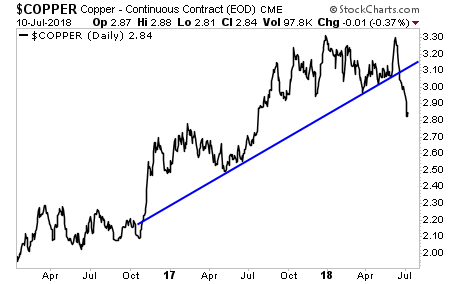 First and foremost, we see that Copper entered a “growth” period in November 2016. From this point until recently 2017, Copper maintained in an uptrend.

That uptrend has now ended.

This is a MAJOR warning that Copper is sensing something is VERY wrong with global growth.

10 of Our Last 11 Trades Were Double Digit Winners

Our options trading system is on a HOT streak: 10 of our last 11 trades were double digit winners!

Secondly, we see that Copper actually began to flatline in October 2017… which incidentally is when the Fed launched its QT program. We also see that since the Fed started this program, Copper has struggled to move higher (red box). And once QT was increased to $30 billion per month in April 2018, Copper began to trend lower. 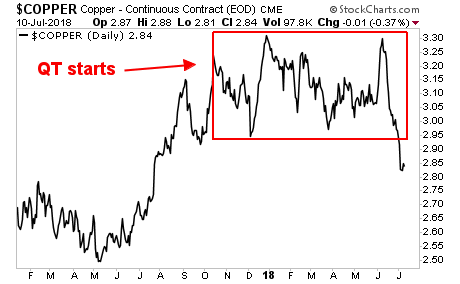 This suggests that the Fed’s QT program is in fact having a direct impact on global growth.  That suspicion is confirmed by the fact that Copper has gone STRAIGHT DOWN since the Fed announced it would hike interest rates another FIVE times in the next 18 months while also increasing its QT program to $40 billion per month.

Since the Fed made that announcement, Copper has dropped 14% without so much as a bounce. 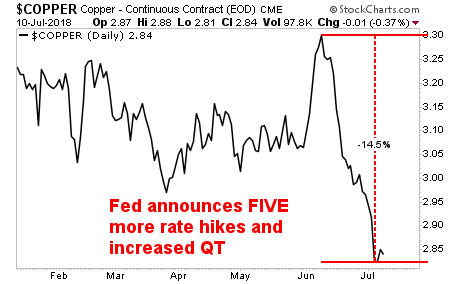 Put simply, Copper is SCREAMING, “the Fed screwed up.” Not only has it taken out its bull market trendline from November 2016, but it is now collapsing without even a meaningful bounce.

ALL of this can be 100% laid at the Fed’s feet. Copper is sending clear signals that global growth is slowing down… but the Fed has determined to actually ACCELERATE the pace of its QT program.

By the way, stocks tend to follow Copper. And based on this recent collapse in the metal, the S&P 500 could EASILY drop to 2,500. 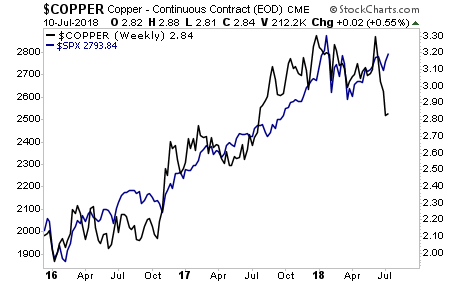