The Biggest Trend in Investing Concerns the $USD… Are You Prepared?

As we’ve noted over the previous weeks, the Powell Fed screwed up royally in June when it forecast five additional rate hikes over the next 12 months along with an accelerated pace of Quantitative Tightening (QT) at $40 billion per month.

I want to be clear: it is not that rate hikes or QT in of themselves are a problem, it is the PACE at which the Powell Fed proposed to do both.

The Fed doesn’t operate in vacuum, and hiking rates EIGHT times while draining an amount of liquidity equal to Sweden’s GDP is totally insane when you’ve got other Central Banks (most notably the Bank of Japan and European Central Bank) running NEGATIVE rates and QE.

Put simply, the Powell Fed was WAY too aggressive with its monetary policy. And the end result was the $USD was strengthening rapidly which was putting the financial system under duress (remember, when you borrow in $USD you are effectively shorting the $USD so the over $65 TRILLION in $USD-denominated debt floating around the global system was like a gigantic debt bomb for which a strong $USD was a lit match). 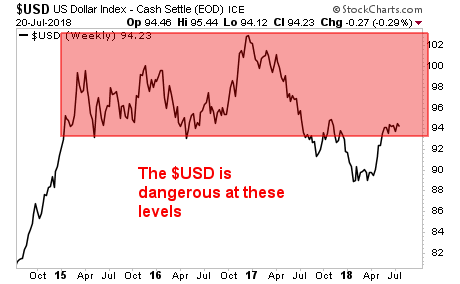 On Friday, President Trump took to twitter attacking the Powell Fed’s aggressive tightening before shifting his focus to China and the European Union, claiming the two were “manipulating their currencies and interest rates lower.”

The message is now clear… the Trump White House wants the $USD to fall and fall hard. And the markets have taken note: the $USD rolled over HARD on Friday, starting the right shoulder of a Head and Shoulders topping formation. 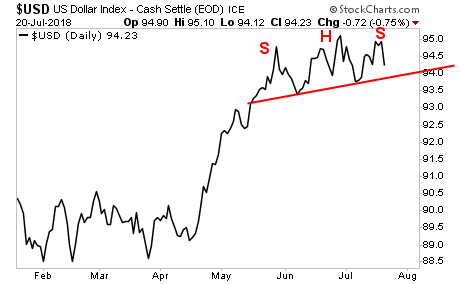 This is just the start. We believe the $USD is now starting the process through which it will eventually drop to the low 80s to test the upper trendline of the massive falling wedge it has formed over the last 40 years. 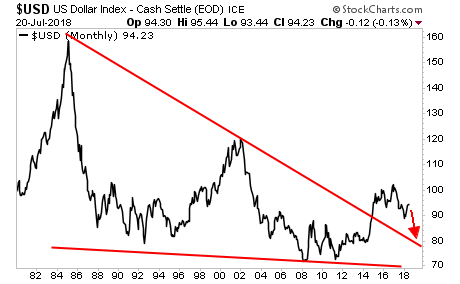 This represents the BIGGEST trend in global finance going forward. As the reserve currency of the world, the $USD’s price action will have a massive impact on all other asset classes. And those who invest accordingly stand to generate literal fortunes.

If you’re looking for more investment insights such as this… as well as active “buy” and “sell” alerts on what investments to play to best profit from the markets, my weekly investment advisory, Private Wealth Advisory can show how.

Private Wealth Advisory takes away ALL the guesswork from the financial markets, telling you which investments to buy (including their symbols), when to buy them, and when to sell.

Our goal is just one thing: to make you money from your investments.

This track record is generating a LOT of interest, which is why we are raising the price of a Private Wealth Advisory subscription later today.

Put another way, today is the LAST day that a Private Wealth Advisory subscription will be this cheap.

We’ve already prepared the infrastructure and the sales order forms
with the new, higher price.

We will be uploading ALL of them tonight at midnight.

So if you have any interest in locking in a subscription at the soon to be old, much lower price, this is your last chance.