Don’t Be Fooled By the US Dollar False Breakout

Perhaps the single most dangerous move an asset class can make is a “false breakout.”

A false breakout occurs when an asset breaks out of a consolidation pattern, only to reverse. The reason why this development is so dangerous is because the reversal is typically both sharp AND violent as momentum chasers and trend-based algorithms “panic sell.”

I bring this up because we may have just witnessed a false breakout in the single most important asset in the world: the US Dollar.

The US Dollar is the reserve currency of the world. It comprises 86% of the currency markets, over 70% of foreign reserves, and is the currency denominated over 60% of global debt.

Put simply, the US Dollar is THE single most important asset in the world. What it does has a PROFOUND impact on the rest of the financial system. Which is why a false breakout in the US Dollar can have TREMENDOUS import for investing going forward.

Having said that, the US Dollar was trading in a consolidation pattern from the middle of June until the middle of August. It has since staged a breakout to the upside, which both the financial media and the vast majority of investors took as “the real thing. 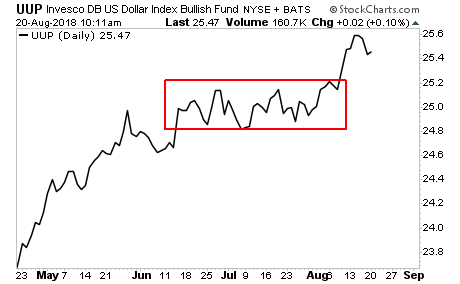 It’s very likely not. The $USD is in fact forming a massive Head and Shoulders pattern right now. This pattern suggests the $USD will be dropping hard into the mid’80s in the coming months. 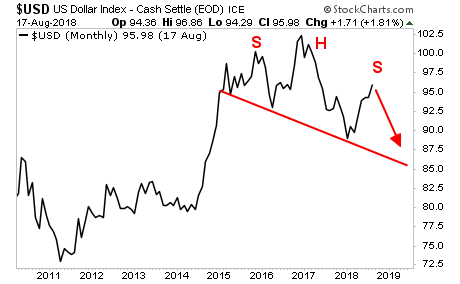 What would trigger this?

The Trump administration signing a trade deal with China. The Trump White House weaponized the Fed to strengthen the $USD for leverage in trade negotiations. But that will be stopping soon. We are already receiving signals that the Trump White House will have this issue resolved before November.