Did the Single Most Important Chart in the World Stage a False Breakout?

I’ve received a number of emails from readers asking me how I can be so certain that the $USD will be dropping hard going forward.

The answer is simple… neither the US Government, not the US corporate sector can afford an extremely strong $USD.

The Trump administration has proven itself to be Keynesian on steroids… and is planning to run $1 trillion deficits despite the roaring economy.

A strong $USD would make this very difficult to do.

It would also have a highly negative impact on US corporations that derive nearly 50% of revenues from overseas. We are already seeing C-level executives discussing the negative impact on recent $USD strength during conference calls. 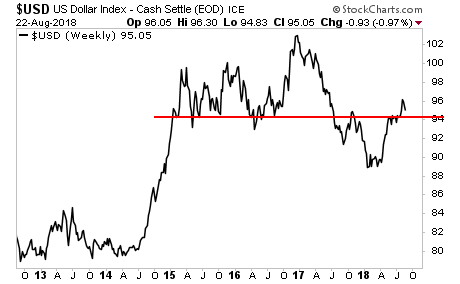 Put simply, both the Government and the Corporate sector want the $USD to roll over here and now.

So we expect the $USD to roll over hard soon. But I want to be clear here… I’m calling for the $USD in the mid-80s… not some full-scale collapse.

The Fed NEEDS the $USD to remain strong enough to attract capital so the US can continue to fund its deficits and debt issuance… but not strong enough that it actively hurts the economy.

If the $USD were to collapse rapidly it could cause a crisis of confidence in the currency. That is the LAST thing you want if you’re attempting to run $1 trillion deficits. 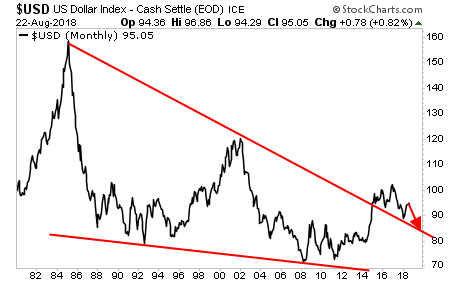