Is Italy the Canary in the Coal Mine For The Everything Bubble?

The EU debt bomb is about ready to go off.

Europe, on the other hand, is an amalgamation of 24 countries, all in various stages of insolvency, and none of which have a Central Bank that can print the Euro (only the European Central Bank can do this).

Which is why, when you consider the absolute insanity of Europe’s debt bubble, you begin to see why this will likely prove ground zero for the next major crisis.

Put another way, based on the ridiculous policies of the European Central Bank (ECB)’s QE program, the US’s debt is being priced as more than TWICE as risky as Italy’s…

Italy’s economy, on the other hand, is roughly the size of the economies of New York and Virginia combined…is growing at 0.2%… has a debt to GDP of 131%… and has to rely on the ECB for access to Euros.

Which of these two countries would be a safer country to lend money?

Which is why the markets are beginning to sense that Italy is in trouble.

The yield on Italy’s 10-Year Bond has broken its downtrend and is now rising rapidly. 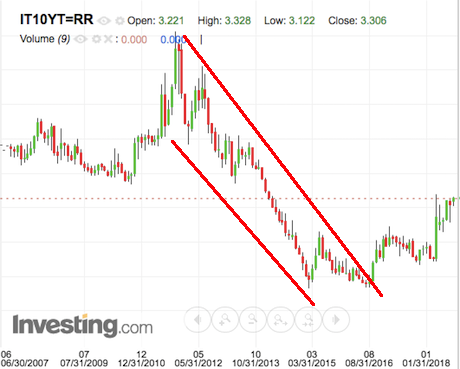 While Italian stocks are about to enter a bear market. 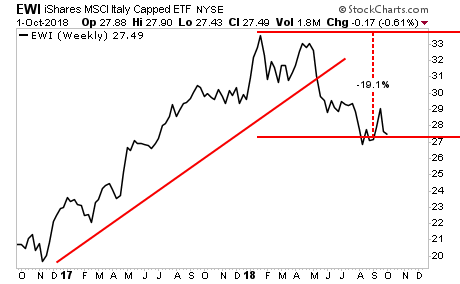 Again, this is a MASSIVE deal. And while 99% of investors are focusing on US stocks hitting new highs… a €2.47 TRILLION debt bomb is getting ready to go off across the pond.