The markets are now facing the perfect storm.

China is entering a recession. Yes, I know the “official” date shows China is doing well, but the “official” data is political propaganda. Former Vice Premiere Li Keqianng admitted in private to the US ambassador in 2007 that every economic data point in China aside from bank loan growth, rail traffic, and electricity, are “for reference only” i.e. fiction.

With that in mind, take a look at the chart for China’s banking sector. Not only is the bull market trendline broken, (blue line) but the chart has crashed an incredible 33%. We are well into a full-blown bear market/ crisis here. 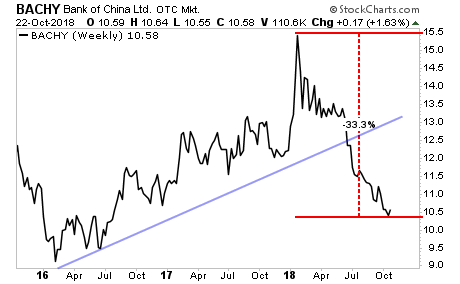 The ECB, working with the EU, managed to pull off a “Hail Mary” since 2015 by effectively buying everything via a gargantuan QE program. However, since the start of 2018, the very same problems (too much debt + political instability) have once again reared their heads… this time in Italy… a country with over $2 TRILLION in debt outstanding… a country/ financial system FAR too big to bail out.

European Financials, like their Chinese counterparts, have taken out their bull market trendline and are officially crashing in a Bear Market. 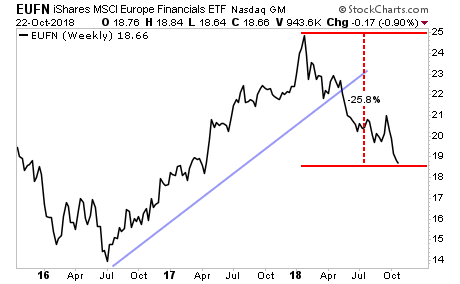 And then there’s the US. On the surface, the US economy is roaring and everything looks great… but just beneath this veneer, the largest financial bubble of all time is blowing up.

The US bond market is over $20 trillion in size. And if you include junior debt instruments, it’s over $60 TRILLION in size.

And this whole mess is beginning to blow up as the yield on the 10-Year US Treasury, the single most important bond in the world, has broken out above its multi-decade trendline. 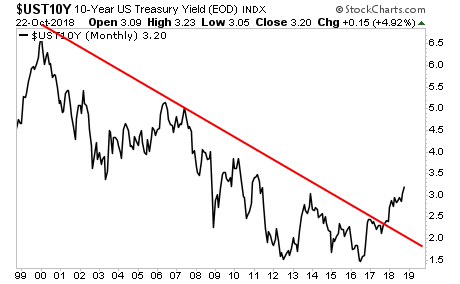 Again, the financial system is facing the perfect storm. We have crises brewing in every major market.

If you have not already taken steps to prepare your portfolio for what’s coming, NOW is the time to do so.