Are You Ready For the Next Crisis? Because It’s Coming in 2019

As I warned yesterday, the political outcome of the midterms if FAR less important than what is happening in the real economy.

What is happening in the real economy is that inflation has hit the point at which corporations are raising prices to the degree than Americans are demanding higher wages to compensate.

Wages and salaries jump by 3.1%, highest level in a decade

This represents the final stage of inflation seeping into an economy. This is why the Fed is so desperate to raise rates even if it blows up the stock market. And it’s why the bond market is in SERIOUS trouble.

And the bond market knows it.

The bond market continues to blow up with yields on the ALL-IMPORTANT 10-Year US Treasury retesting their recent highs. 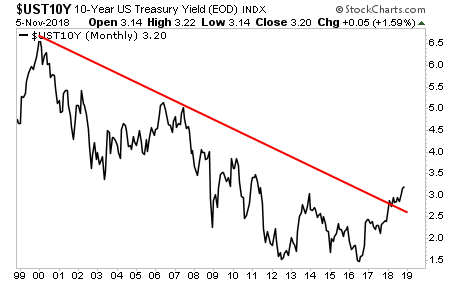 This is a MASSIVE deal. This is effectively the bond markets telling the world that inflation is MUCH higher than most believe. And we’re now reaching the point at which junior debt instruments (risky corporate debt, auto loans, subprime mortgages) are beginning to blow up again.