The Markets Have Just Realized Global Growth is DEAD

The markets picked up on this first, with Copper, Lumber, Industrial Metals and other economically sensitive asset classes collapsing starting in May. 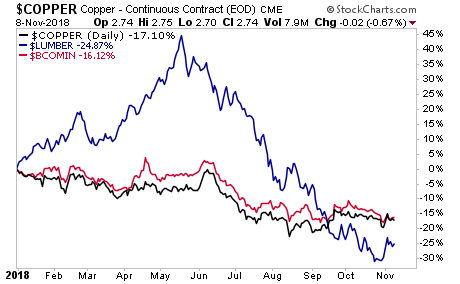 Looking at those charts, it was easy to single out the Fed as the culprit, since the Fed’s hawkishness had ignited the $USD which in turn put pressure on commodities.

However, what’s happening now is much bigger than just the Fed. Between June and August, two of the stock markets that are most closely aligned with global trade (South Korean and Germany) topped.

And when I say, “topped” I mean they TOPPED and then proceeded to collapse. 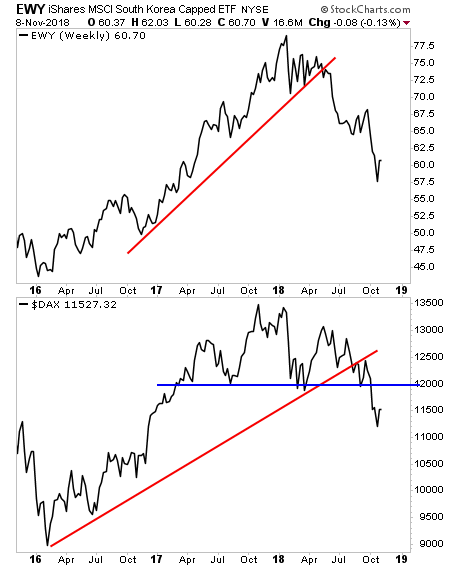 Looking at those charts going into October, you could have argued that this was due to the Fed and the Trump trade war. Indeed, had the Fed STOPPED its hawkishness and the Trump administration managed to cut a deal with China last summer, it’s quite possible that the financial markets would have corrected, but we wouldn’t have had a full blown meltdown.

However, neither of those things happened. The Fed made it clear it’s going to hike until something breaks. And China, for whatever reason, has decided it would rather risk economic collapse, than appear weak against the US.

Which is when October hit… at which point it became clear that what’s now unfolding is no longer due to just trade tariffs and rate hikes. By the time October ended, an astonishing 89% of global assets were in the red for the year.

There is only one way to interpret that kind of bloodbath: we’re officially at the end of a credit cycle that began in 2009. The good times are officially over, and the bad times (the next crisis) is about to begin.