Last week the markets rallied on hype and hope of a potential trade deal between the US and China… and the fact it was options expiration week.

Wit those items out of the way, the markets will now begin to adjust to economic realities again.

Those economic realities? That the global economy is slowing… and not a little.

Indeed, the latest spate of economic data indicates just had bad things are getting.

This is happening at a time when EVERY major Central Bank is pulling the plug on liquidity.

The US Federal Reserve is now actively draining $50 billion per month from the financial system.  The ECB will be ending its QE program next month. And now even the Bank of Japan is stating that large-scale monetary programs (QE) are losing favor.

Japan’s economic activity and prices are no longer in a situation where decisively implementing a large-scale policy to overcome deflation was judged as the most appropriate policy conduct, as was the case before,” Kuroda said in a speech to business leaders in Nagoya, central Japan:

China, Germany, and Japan’s stock markets have already figured this out. It now time for US stocks to “play catch up.” 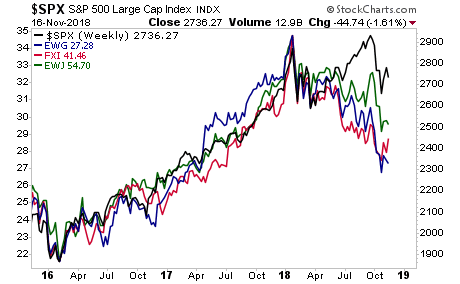 How bad will it get?

Lumber, perhaps the most “growth sensitive” asset on the planet, suggests the S&P 500 should be at 2,100. 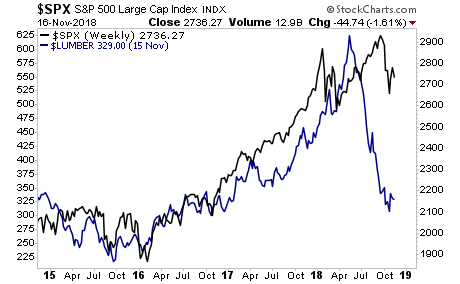 Buckle up, the next crisis is about to hit.