Ignore the day-to-day moves in the markets, in the big picture, some MAJOR is happening… namely, that the Everything Bubble is bursting.

By creating a bubble in sovereign bonds, the bedrock of the current financial system, Central Banks created a bubble in EVERYTHING. After all, if the risk-free rate of return is at FAKE level based on Central Bank intervention… ALL risk assets will eventually adjust to FAKE levels.

This whole mess starting blowing up in February when we saw the bubble in passive investing/ shorting volatility start to blow up (some investment vehicles based on these strategies lost 85% in just three days). 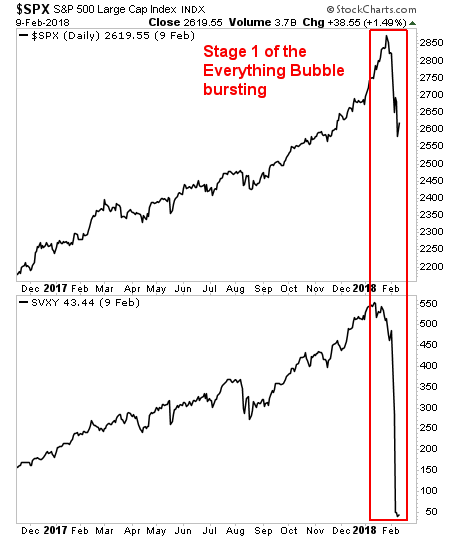 The media and Wall Street swept that mess under the rug… which allowed the contagion to start spreading to other, more senior asset classes… like corporate bonds.

The US Corporate bond market took 50 years to reach $3 trillion. It doubled that in the last 9 years, bringing it to its current level of $6 trillion.

This debt issuance was a DIRECT of result of the Fed’s intervention in the bond markets. With the weakest recovery on record, US corporations experienced little organic growth. As a result, many of them resorted to financial engineering through which they issued debt and then used the proceeds to buyback shares.

2)   Provided the stock market with a steady stream of buyers, which…

If you think this sounds a lot like a Ponzi scheme that relies on a bubble in corporate debt, you’re correct. And that Ponzi scheme is now blowing up. The question now is
how bad will it get?”

The IMF estimates about 20% of U.S. corporate assets could be at risk of default if rates rise – some are in the energy sector but it also includes companies in real estate and utilities. Exchange-traded funds that buy junk bonds, like iShares iBoxx $ High Yield Corporate Bond Fund (HYG) and the SPDR Barclays Capital High Yield Bond ETF (JNK), could be among the most vulnerable if credit risks rise. iShares iBoxx $ Investment Grade Corporate Bond ETF (LQD) could also suffer.

With a $6 trillion market, a 20% default rate would mean some $1.2 trillion in corporate debt blowing up: an amount roughly equal to Spain’s GDP.

This process is officially underway.

Credit Markets Are Bracing for Something Bad

…the Bloomberg Barclays U.S. Corporate Bond Index losing more than 3.5 percent and on track for its worst year since 2008.

Indeed, the chart for US corporate junk bonds is downright UGLY. 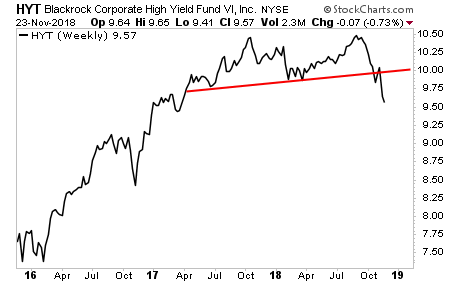 This is just the beginning. As contagion spreads we expect more and more junior debt instruments to default culminating in full-scale sovereign debt defaults in the developed world (Europe comes to mind).

This will coincide with a stock market crash that will make 2008 look like a picnic.

Today is the last day this report will be available to the public.