Jerome Powell is NOT Bernanke or Yellen. He Doesn’t Care if Stocks Crash

Investors are once again pinning their forecasts on hope.

The hope is that the Powell Fed will slow the pace of its rate hikes based on the recent market carnage in stocks and bonds.

And once again the Fed is going to destroy these hopes.

As I explained to clients in August, the Powell Fed is revolutionary to the point that very few understand. Whereas former Fed chairs Bernanke or Yellen would have halted ALL rate hikes the second stocks corrected, current Fed Chair Jerome Powell has made it clear that the only reason he would even consider slowing the pace of rate hikes is if stocks enter a prolonged collapse that was so massive it damaged consumer spending.

We are not talking about a two to three week correction… we are talking about a something so massive that ordinary Americans take note and alter their spending behavior.

Think a three to six month bear market in which stocks lose 30% or more.

In chart terms, Powell didn’t even bat an eye at the October drop. Heck he didn’t even THINK about holding off on hiking rates in December. 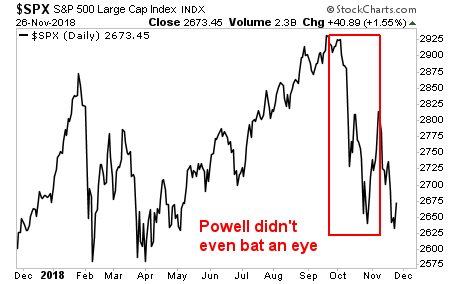 No… Powell won’t be walking back the Fed’s hawkishness until consumer spending takes a hit as Americans worry about the stock market collapsing. We’re talking about a drop down to this line. 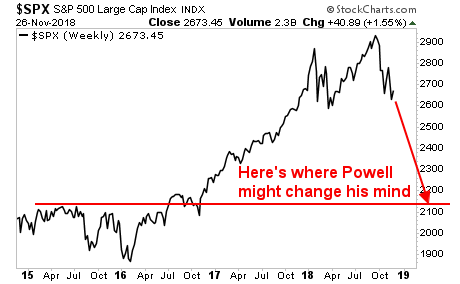 The old adage says, “don’t fight the Fed.” The Fed has made it clear what its goals are. If you’re betting on the market entering another bull market now, you’re in for a nasty surprise.