Ignore the Media, the Next Leg Down is About to Hit Stocks $SPX

Yesterday, Fed Chair Jerome Powell did a complete 180 on the Fed’s hawkishness. For 11 months straight Powell had maintained that the economy was booming and that the Fed would be hiking rates until the end of 2019.

Powell did this despite:

1)   The entire Emerging Market space blowing up with many emerging stock markets crashing over 30%.

2)   The clear evidence that Fed policy was destroying global growth with Copper and other economically sensitive bellwethers collapsing into bear markets.

3)   The clear evidence that corporate profit margins peaked in 2Q18 and the business cycle was turning down in the US.

None of the above mattered to the Powell Red. Time and again Chair Powell ignored these issues during press conferences, speeches, and during Q&A sessions. Which is why his sudden decision to change course is not a good thing… in fact it’s very VERY bad.

Because this signals that something truly horrific is brewing in the financial system.

Think of it this way, if you’re willing to stomach most of the stock markets in the world entering bear markets… and economic bellwethers CRASHING… just how awful does something have to be for you to stop on a dime and hit the “panic” button?

If you don’t believe me, consider that the $USD barely dipped on Powell’s announcement yesterday. Heck, the greenback didn’t even drop 1%. The BIG drop the media ranted about is that tiny red square in the chart below. 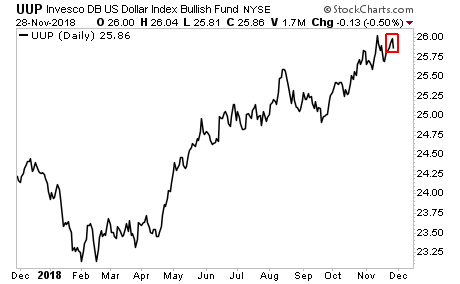 If the Fed’s decision to drop its hawkishness was a good thing, the $USD would have collapsed 1.5% or more. The fact it barely even fell 0.5% tell us that the financial system realizes something BAD is afoot.

As if this wasn’t enough, Treasury yields didn’t even budge yesterday. The yield on the 10-Year US Treasury finished the day flat. 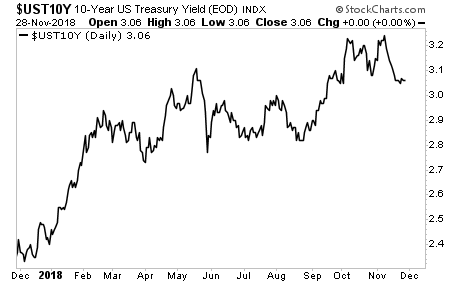 If the Fed announcement yesterday was a great thing, yields should have erupted higher yesterday as a signal that growth and inflation/ reflation were igniting. They didn’t.

So we’ve got both the currency markets and the bond markets telling us that something bad is happening. Between this and the fact that Jerome Powell had to hit the “panic” button on the Fed’s monetary policy, I fully expect stocks to crash within the next 60 days. 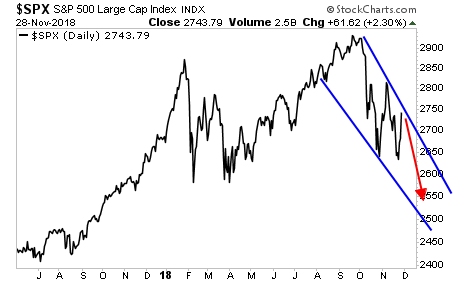