Powell Goes Dovish… But It’s Too Late to Change Anything

Stocks roared higher last week when Fed Chair Jerome Powell did a complete 180 and proclaimed some of the most dovish statements in Fed chair history.

Not only did Powell suddenly claim he was “listening to the markets,” meaning he was worried about the drop in stock prices, but he also suggested the Fed is completely open to changing the pace of its rate hikes and balance sheet normalization.

To be clear: Powell has finally realized that Fed policy was blowing up the financial markets.

Unfortunately for him, it’s too late. And while the DUMB money is buying into the stock rally, the smartest, most liquid market in the world isn’t buying it for a second.

I’m talking about the currency markets.

The currency markets are the largest most liquid markets in the world. They trade $5-$6 trillion in volume PER DAY. To put this into perspective, it’s over 500 TIMES more volume than the NASDAQ.

So when something MAJOR happens in the financial system, it’s the currency markets that “get it” first.

With that in mind, consider that the $USD, which should have collapsed based on Fed Chair Powell’s statements, barely dropped even 1%. Not only that, but the $USD failed to even break below its previous low from the week before. 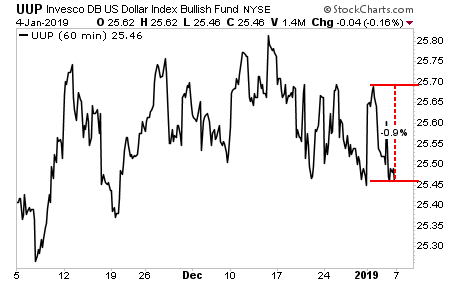 If Powell’s sudden dovish turn was actually going to stop the deflationary tidal wave that is underway, the $USD would have fallen more like 3%+ last week.

Which is why I’m not buying this stock rally for a moment. The Fed CONTINUES to engage in the most hawkish policy of all time. A few soothing words from Jerome Powell haven’t changed the fact that the credit cycle has turned and the next major bear market is upon us.

Indeed you could easily argue that the entire stock move since November 2016 was a blow off top which means we’ll be erasing ALL of it in short order. 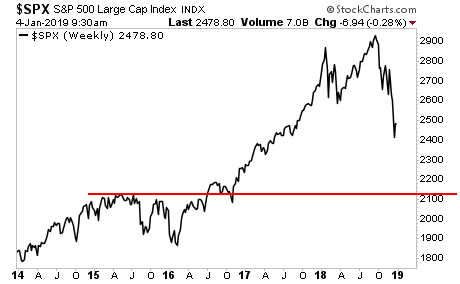