The next leg down is officially here.

The big picture story for the markets is that the US/China trade deal is no longer important. Even if the two nations did agree on a perfect deal that resolves the structural issues between their economies (highly improbable), the fact is that the global credit cycle has turned and we are entering a contraction/ crisis.

Europe is now officially weakening with most major economies (Germany, France, Italy and Spain) approaching, if not already in, recessions.

The market is fully aware of this. The German DAX has ended its bull market from the 2009 low. This latest rally is a pathetic dead cat bounce in the context of a larger bear market. 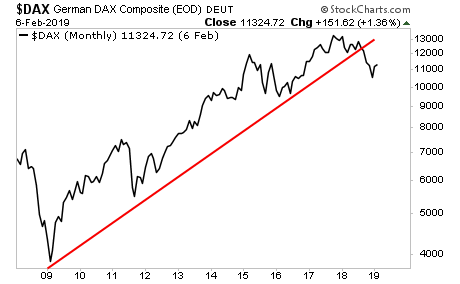 The situation is even worse in China. There we have the beginning of complete systemic collapse as the largest pile of garbage debt/ financial fraud finally blows up. China spends $25 in debt for every $1 in GDP growth. And its economy is growing, at best, by 2% per year.

The market similarly knows this which is why China has broken in 20+ year bull market trendline.  The Chinese stock market has been in a series of successive bubbles followed by spectacular crashes for the last two decades. This time around, the Crash will be something truly astonishing to behold. 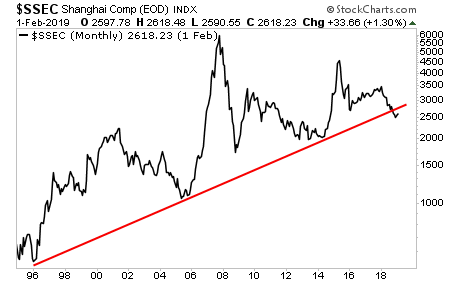 This leaves the US, where despite all the fanfare, the economy is almost certainly contracting if not already in a full-blown recession.

Maxing out your credit card is very different from getting a raise. What’s happened in the US in the last two years is the country maxing out its credit card on a personal, state, and national level. 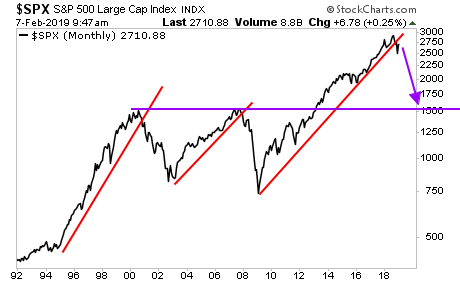