Mark your calendars… January 30 2019, marks the day that Jerome Powell threw in the towel and became a stock market promoter just like Janet Yellen and Ben Bernanke before him.

It will also likely mark the day that the Fed began to lose any credibility in terms of monetary policy.

For those of you who missed it, that day the Fed failed to raise interest rates.

This means the Fed believes that with unemployment supposedly at 3.9% and GDP growth at 3.7%… the US economy could not handle a 0.25% interest rate hike to 2.75%

On top of this, the Fed also indicated that it might NOT hike rates again in 2019 AND that it is prepared to adjust its balance sheet normalization or Quantitative Tightening (QT) program if necessary.

This is the single biggest reversal in Fed history.

The Fed went from promising four rates hikes in 2019 and leaving its QT program on autopilot to pushing for NO rate hikes and suggesting that it would “adjust” its QT program if needed. All in the space of a SINGLE QUARTER (3 months).

And unfortunately for those who bought into stocks based on this… it’s going to fail.

The reality is that barring the announcement of a NEW Quantitative Easing (QE) program, the Fed will fail to stop the coming market carnage. Stopping rate hikes and expressing flexibility in terms of QT is VERY different from actually CUTTING rates and HALTING QT.

Remember, the Fed is STILL draining $50 billion in liquidity from the system every month regardless of its verbal interventions. That problem has NOT been fixed.

Also, and this is the REALLY big issue… The reason the Fed is so openly switching to dovish is because something REALLY BAD is unfolding in the financial system.

It’s not as though the Fed simply went from hawkish to dovish on a whim. Fed officials have clearly realized what I was talking about as far back as June 2018… namely that its rate hikes and QT were going to trigger a crisis.

That process is already underway, stocks have taken out their bull market trendline just as they did in 2000 and 2008. It’s now just a matter of time before the crisis hits. 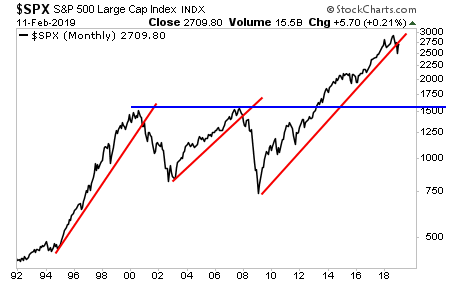