If Everything is Great… Why is the Fed PANICKING?

The Fed is truly in a panic.

Let’s take a big picture perspective of the last year or so.

Throughout 2018, the Fed claimed it could normalize policy (raise rates and shrink its balance sheet).  Heck, the Fed didn’t just claim this, it was supremely confident of it.

Indeed, the Fed was still pushing this narrative as late as August, when most of the Emerging Market space and many economically sensitive asset classes had already collapsed 30%.

US stocks finally joined in the carnage in October, dropping 20% from peak to trough into late December. The Fed then suddenly came out an abandoned ALL of its talk of normalization. And stocks bounced.

In chart form, we’re talking about the following: 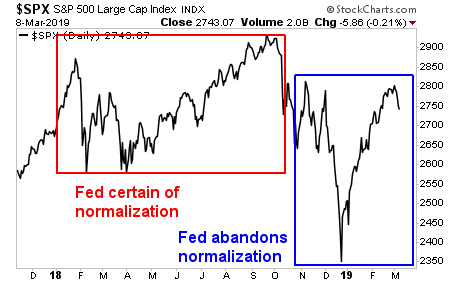 Now, here’s where it gets interesting… despite the bounce in stocks and the recovery in the credit markets starting in December, the Fed didn’t start talking about normalizing policy again… instead it started talking about introducing EMERGENCY monetary policies.

If the issue was really just about stocks dropping… and if things were really just fine “behind the scenes” with the US financial system, why is the Fed talking about doing things like making QE a REGULAR (not emergency) policy or introducing NEGATIVE interest rates?

Even more bizarre… current Fed Chair Jerome Powell appeared on 60 Minutes last night along with former Fed Chairs Ben Bernanke and Janet Yellen… in a clear an obvious PR move to provide assurance to the markets.

So, in chart form, we’re talking about the Fed doing all of this while the markets are doing the following: 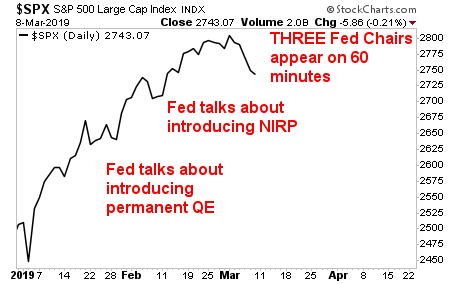 Again… if everything is fine and dandy, WHY is the Fed panicking like this?

I suspect it’s because the Fed has realized what I’ve been warning about for years… that you CANNOT normalize an Everything Bubble. And worse still, its attempts to do so have already triggered the beginnings of the next crisis.

Indeed, the stock market telling us that the bull market is OVER. 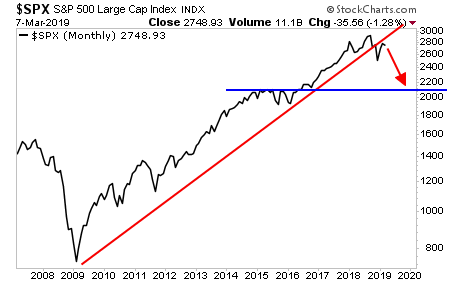