Bull Trap Warning: There Has Been No Real Progress on China-US Trade

So it was all BS.

For months now, the Trump administration, through both tweets from the President and countless articles published in the financial media, has proclaimed that a trade deal between the US and China was “just around the corner.”

Every single time these stories/ tweets hit the newswires, stocks have rallied on the news. Every. Single. Time.

And it was all complete BS.

How do I know this? Because Bloomberg just unintentionally revealed it more than halfway down an article concerning a possible meeting between President Trump and Premiere Xi of China.

Lighthizer this week pointed to “major issues” still unresolved in the talks, with few signs of a breakthrough on the most difficult subjects. Chinese officials have also bristled at the appearance of the deal being one-sided, and are wary of the risk of Trump walking away even if Xi were to travel to the U.S.

Without an agreement on “the most difficult subjects” (i.e. IP theft, enforcement of violations) there is NO trade agreement. End of story.

We’re on another winning streak, having closed out a 9%, 12% and another 12% gain in the last four days alone.

There are currently fewer than 10 slots left for potential subscribers.

And the worst part is it has suckered in Mom and Pop investors like sheep to the slaughter.

The latest fund inflow data reveals investors plowed over $27 BILLION into US stock funds and ETFs in the week ended March 13th2019. This is an all-time record.

Worst of all, they are buying right as stocks slam into resistance, failing to score a breakout (despite countless trader games). Momentum is gone here with MACD on a “Sell” signal. We also have negative divergence on the RSI. 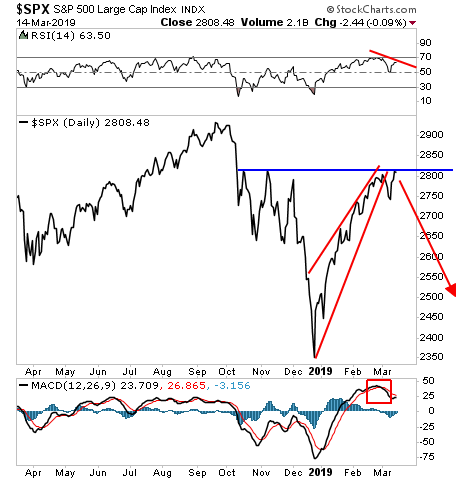 Indeed, in the Big Picture the stock market telling us that the bull market is OVER. 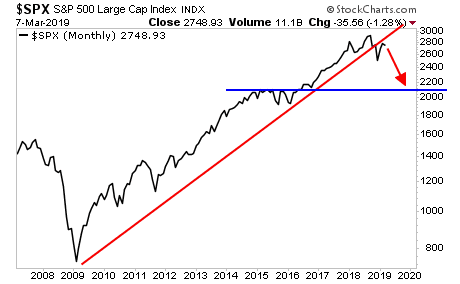