The Fed’s Obsession With Stocks Reveals the Truth: They’re Terrified of What’s Coming

In the last two months every single Fed Hawk has given up on normalization.

Throughout 2018 Fed Chair Powell maintained that he was focused EXCLUSIVELY on normalizing Fed policy by:

1)   Reducing its Balance Sheet to pre-crisis levels of ~$1 trillion, a whopping $3.5 trillion lower than the $4.5 trillion it was when Powell took the helm at the Fed.

2)   Raising interest rates to the neutral rate (the rate of GDP growth/ inflation).

Powell repeated time and again that these were his two primary objectives… no matter what.

Then came the October-December US stock market meltdown, and Powell buckled like a paper plate.

Now, it’s big deal for a Fed Chair to abandon all pretense of hawkishness… however, major Fed decisions such as raising or lower interest rates are not made exclusively by the Fed Chair; they are made by the Federal Open Market Committee (FOMC), a group of 12 Fed officials.

In this context, Powell could be flip as dovish as he wants, but as long as the majority of the FOMC remained focused on normalizing policy, the Fed would continue to raise rates and shrink its balance sheet.

Any remote chance of that being the case is now officially over.

Lael Brainard is a member of the FOMC. She has been EXTREMELY hawkish throughout the last 18 months.

For instance, in September 2018 she commented that she was aware of the US Treasury yield curve inverting, that she was also aware that this typically meant a recession was coming, but that she was certain this time “was different” and the yield curve would not stop the Fed from raising interest rates.

Again… Brainard was stating that the bond market was WRONG and that the Fed would continue to hike rates in September 2018.

Fast-forward to February and Brainard stated the following:

The U.S. Federal Reserve should stop paring its balance sheet by the end of this year, Governor Lael Brainard said on Thursday, suggesting the Fed could wind up with a permanently bigger balance sheet than had been expected even a few months ago.

So in four months, a major Fed hawk on the FOMC went from “an inverted yield curve doesn’t matter, we’re still hiking rates,” to “we’re not going to hike rates, and we should end QT too.”

Then there’s Richard Clarida, another FOMC member who stated back in late-October 2018 (after the stock market had already begun to collapse) that Fed policy remained “accommodative” (meaning easy) despite three rates hikes that year. Moreover, he believed the Fed would need to continue to raise rate for some time.

Fast-forward to February and Clarida is now stating that “rates are in a good place” and that “there are scenarios in which the Fed won’t hike rates in 2019.”

You get the idea… when I say that every single hawk on the FOMC has abandoned any interest in normalization of policy, I mean EVERY. SINGLE. ONE.

Why are these people so obsessed with stocks?

Because they have no idea how to generate actual economic growth. So their only option is to create bubble after bubble regardless of how bad the crises gets.

Speaking of which… the next crisis is at our doorstep. The S&P 500 has broken its bull market trendline. The last two times this happened a financial crisis hit within six months. 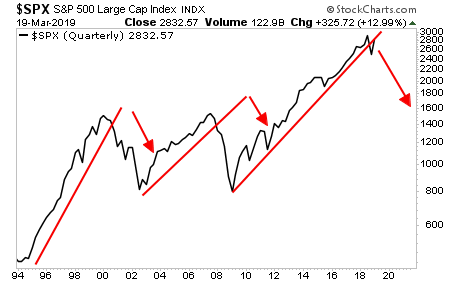