Where Will the Next Crash Take Stocks?

The next crisis will soon hit the financial system.

If you don’t believe me, I have to ask… if this statement is false, why is the Fed desperately attempting to lay the groundwork for the next round of monetary easing at a time when the stock market is within 5% of its all time highs?

1)   The Fed stating it is DONE with rate hikes in 2019 when just three months ago it was talking about raising rates 3-4 times this year.

2)   The Fed will taper its Quantitative Tightening (QT) program in May to $15 billion before ending it completely in September… when just three months ago the Fed stated it would keep QT at $50 billion per month all year.

3)   The Fed floating the idea of making QE a REGULAR monetary policy (as opposed to one used exclusively during emergencies).

4)   The Fed revealing it is already reviewing monetary policies so extreme that it opted NOT to use them during the Great Financial Crisis of 2008.

5)   The head of the NY Fed stating that during the next downturn the Fed is considering using Negative Interest Rate Policy (NIRP).

This is absolutely astonishing.

A BIG Profit Trading System That EXPLODES During Market Crises

I’ve spent the last four years developing a trading system to profit from market volatility. Since that time, this trading system has produced average annual gains of 41%… and we’re not even in a crisis yet!

By the way, I’m not talking about a single trade… I’m talking gains of 41% per year on the ENTIRE portfolio.

We’re on another winning streak, having closed out a 9%, 17% and another 20% gain in the two weeks alone.

There are currently fewer than 5 slots left for potential subscribers.

At a time when the US economy is supposedly running at 3+%, unemployment is supposedly around 4%, and the stock market is a mere 5% of its all time highs… the Fed is talking about introducing NIRP, making QE a ROUTINE policy tool, and considering monetary policies so extreme that it chose NOT to introduce them during the 2008 crisis.

Why is the Fed doing this?

Because it knows the Everything Bubble has burst and the Fed is desperate to get the financial system back under control. 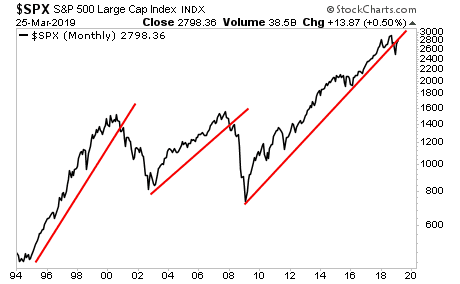 Every time the stock market has broken its monthly bull market trendline in the last 30 years, it’s retraced roughly 50% of its gains via a crisis. 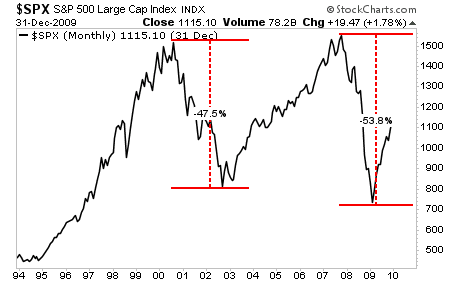 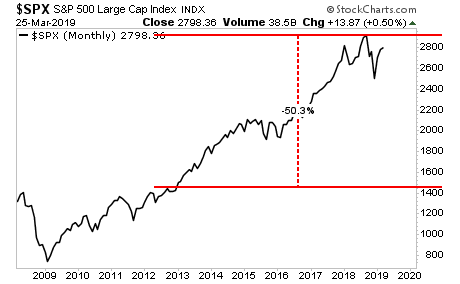 THIS is what the Fed is preparing for.