Bonds Call “BS” on the Second Half Growth Narrative

One investor has a history of timing major market turns like no other.

He called the 2011 growth peak before anyone else. He nailed the 2016 bottom in risk assets. And he even timed the December bottom perfectly.

His name is Dr. Copper.

Because of its countless industrial uses, copper is more sensitive to economic growth or stagnation than any other asset class on the planet. Which is why investment legends (among them Stanley Druckenmiller, who is arguably the greatest investor of the last 30 years) watch Copper like a hawk.

With that in mind, take a look at the long-term Copper chart. You’ll note that Copper hit its peak right at the top of the 2011-growth/inflation cycle. It also caught the bottom of the deflationary drop in January 2016. And it also peaked during the “synchronized growth” cycle of late 2018.

However, since that time, Copper has struggled. The industrial metal has tried repeatedly to mount a sustained rally, but cannot break out over long-term critical resistance (red line). 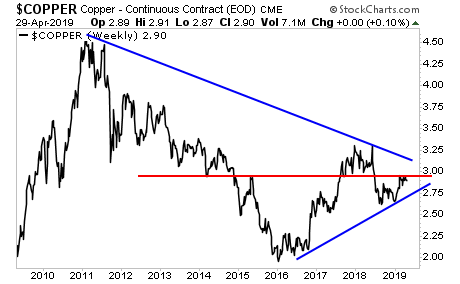 Simply put, Copper isn’t “buying” into the current “growth hype narrative” being spun by the media. If a great trade deal was coming between the US and China… if the world was going to re-enter a period of economic growth… if Central Banks were indeed about to bring us back into a new wave of inflation/ growth, Copper should be rallying strongly.

Now throw in the fact that US Treasury yields are in a clear downtrend, and have broken below critical support (blue line), and you’ve got TWO of the most important “growth” identifiers telling you that growth is very very weak right now. 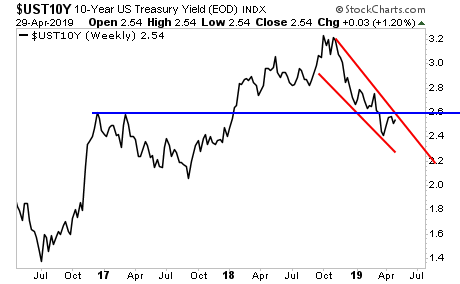 Put simply, the SMART money is warning to WATCH OUT when it comes to growth. Meanwhile, stocks are rallying if an economic utopia is about to hit. 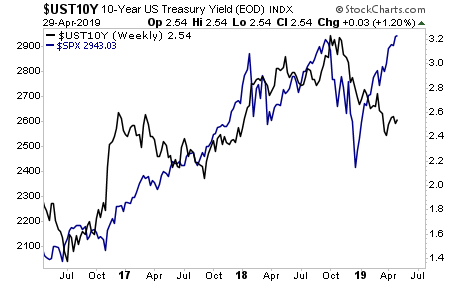 One of these is correct. Given what Copper and Bonds are saying, stocks are in for a VERY rude surprise soon.

And when that surprise hits, it’s going to be too late for investors who weren’t paying attention.

Did you know the Fed is reviewing monetary policies so extreme that it didn’t use them when the 2008 crisis hit?