Warning: Central Banks Cannot Prop Up the Markets Much Longer

The trade deal is dead… stocks just don’t know it yet.

Stocks continue to cling to hope that somehow, the US and China will come to an agreement. There will be no agreement for two simple reasons:

1)   China will not allow itself to look weak by making concessions.

2)   The Trump administration is not comprised of the usual weak-willed DC bureaucrats.

You can argue with me on either of those points, but the “smart” assets in the financial system already have told us what’s coming.

Coppers which is closely aligned to economic growth, has shown us that global peace… and prosperity are not just around the corner. Unlike stocks, Copper never even came close to reclaiming its former high. It is now trapped beneath major resistance. 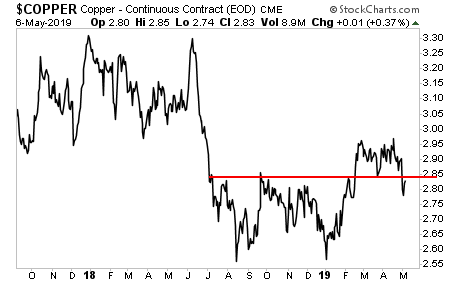 Bond yields are another “smart” asset class that is telling us to get defensive and NOW. The yield on the 10-Year Us Treasury has broken the uptrend formed by the “global synchronized growth” of 2018 (red line). It is now in a clear downtrend (purple lines). 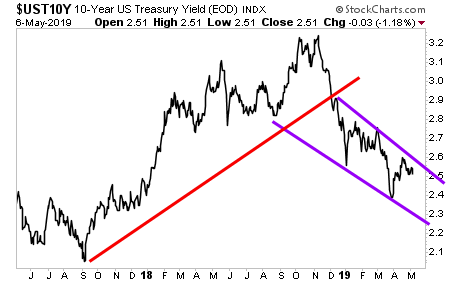 Bond yields fall when economic growth is contracting. The fact that Treasury yields are now even lower than they were during the December 2018 meltdown tells us that globally the world is in a truly precarious state.

So what happens to stocks when they wake up to what Copper and Bond Yields have already figured out? 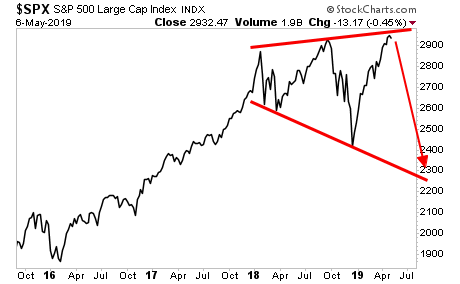 A crash is coming. And smart investors are preparing for it now before it hits.