The market is now moving into the perfect situation for a collapse.

Year to date, the stock market has roared higher, delivering one of its best starts to a year in history with the Russell 2000, the S&P 500, and the Dow Jones Industrial Average all putting in double digit gains in the first five months of 2019. 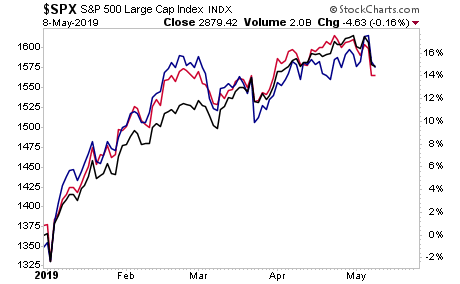 Unfortunately, this sharp rally was based on two beliefs:

1)   The Fed would soon begin easing monetary policy by either cutting rates or launching QE.

2)   The US and China were close to signing a trade deal.

We are now discovering that both of these beliefs were wrong…

The Opportunity From Triple, Even QUADRUPLE Digit Gains is Here

And the REAL market moves haven’t even started yet!

The doors close to this trading system tonight at midnight.

Regarding #1, the markets are beginning to realize that while Fed has made a lot of verbal changes, it has yet to do anything concrete. The Fed continues to drain $15 billion in liquidity from the system every month. And it has made it clear that it won’t be cutting rates or launching QE unless things worsen.

As for #2, it is now becoming clear that China and the US are nowhere near an actual trade deal. Over the weekend China altered the language of the trade deal to remove all legally binding language. Put another way, China wants a deal that it can ignore/abuse without repercussions.

The Trump administration has responded to this by threatening to raise tariffs on Chinese goods from 10% to 25%. As I write this, they have already filed the paperwork for these new tariffs to go into effect should China fail to agree to the US’s demands today during trade talks.

Put simply, this entire deal is hanging by a thread. Markets don’t like surprises. And the current situation is ripe for a major surprise to the downside.

As I write this, the S&P 500 is at critical support at 2,875. If we break this level, the doors are open to a gap down. And I’m not talking about a slow grind lower…I’m talking about a SHARP VIOLENT drop. 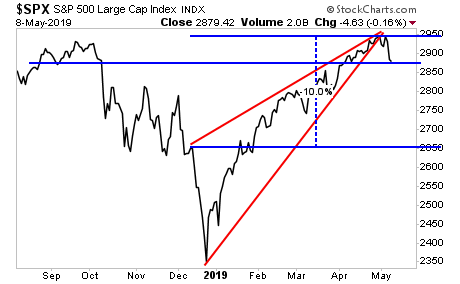 Put simply, stocks are in serious trouble and with the right positions, you could turn this collapse into major profits.

As I write this, there are only 27 copies left.