The Fed is now in the process of trying to “patch” over the bursting bubble, to stop the financial system from experiencing another crisis.

And President Trump just “signed off” of the Fed’s plan.

You see, according to the Fed’s Dual Mandate (the mandate as issue by the US Congress to the Fed in 1977), the Fed is meant to pursue two things:

At that time, the Fed believed inflation was getting out of control… and that economic growth was raging hot…

By the way, when the Fed shrinks its balance sheet by $200 billion, it represents the equivalent to another rate hike…

So the Fed technically raised rates SEVEN times in 2018 (four rate hikes plus a balance sheet reduction of $600 billion).

This burst the Everything Bubble, with yields on US Treasuries breaking out of their 30+ year long-term downtrend. 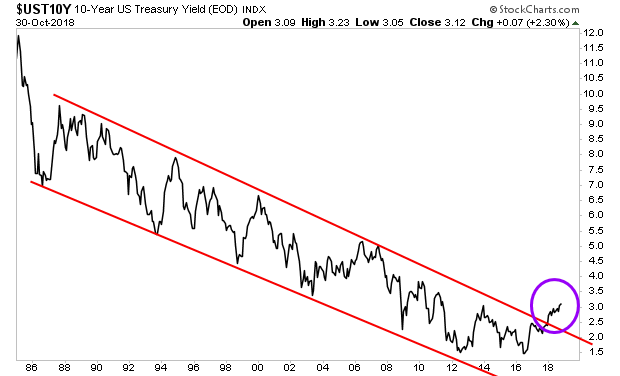 And because the US economy is so saturated with debt… this increase in yields began to hurt the economy as well (debt payments rose, cutting into cash flows).

Since that time, the Fed has begun crafting a plan to “patch over” the leaking Everything Bubble.

That plan consists of the Fed dropping the inflation component of its Dual Mandate… and pursing economic growth regardless of whether or not it unleashes higher rates of inflation.

As usual the talking heads will ridicule the President, saying he doesn’t understand inflation… or some other insult.

The truth is, this was the President openly telling the Fed to pursue growth by any means necessary…

Put another way… the President of the United States told the US Central Bank… “start stimulating NOW.”

Can you imagine what the Fed will do now that President himself is pushing for higher inflation?

On that note we offer a Special Investment Report concerning FIVE investments you can use to make inflation pay you as it rips through the financial system in the months ahead.

We made 100 copies available to the public.

Currently there are just handful left.

This entry was posted in Central Bank Insanity. Bookmark the permalink.
This is the Last Bull Market Of Our Lifetimes