Whatever You Do, Don’t Read This If You Think a Trade Deal is Coming

2)   China demanding that the US lift its ban on Huawei as part of any trade agreement.

Regarding #1, this is a clear signal that no deal is coming.

Because China’s leadership will never sign a deal that makes them look weak.

In the context of the President’s threat of more tariffs, signing a deal this weekend would make China’s leadership look fearful. So forget about China coming to the table interested in signing a deal.

Regarding #2, the Chinese telecom Huawei is one of the greatest national security threats to the US. The company has already been implicated in a slew of crimes/ security issues ranging from spying on customers to stealing trade secrets.

With that in mind, the notion that President Trump would even consider allowing Huawei to gain access to US markets is ludicrous. China might as well ask the US to change its currency from the US Dollar to the Yuan.

Put simply, NO DEAL is coming this weekend at the G-20. Both sides have made it clear they have no interest in reaching a deal.

The bond market has been telling us this since January…

While stocks have rallied on hype and hope of a trade deal, bond yields have plunged signaling that there will be no trade deal and that the global economy is rolling over. 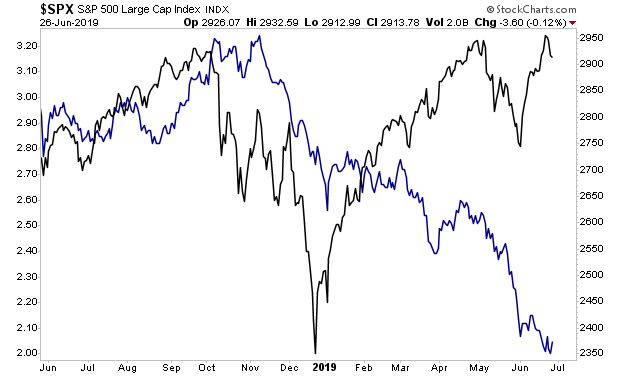 So while stocks might hold up for a few more days, starting next week, a Crash will begin… 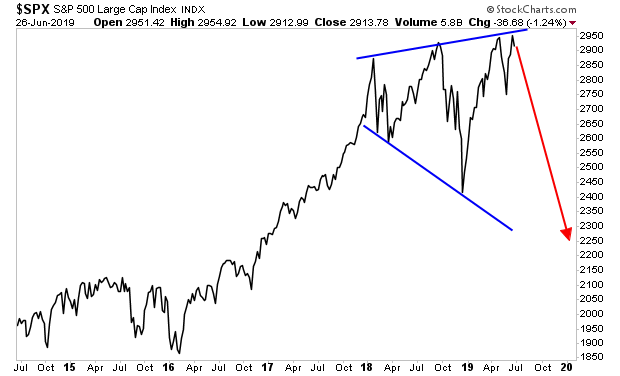