Three Reasons Why the Fed is In a Panic

Just what exactly is terrifying the Fed?

Indeed, on Thursday, John Williams, who runs the NY Fed (the branch in charge of market operations) suggested the Fed needs to cut rates to ZERO again.

This is happening at a time when economic data is rebounding, unemployment is below 4% and GDP growth is north of 3%.

So what exactly is going on? What does the Fed know that has it so terrified, because it’s obviously not the US economy.

Sitting atop over $49 trillion in OCT derivatives, DB is like Lehman Brothers 2.0. And despite the best efforts of management and the authorities, the bank is imploding. DB shares were rejected by resistance last week, ending the “hope bounce” from recent moves to curtail the blow up. 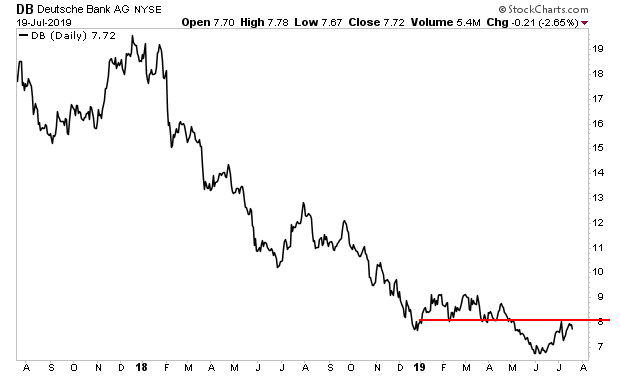 China experienced its first financial institution failure in 21 years in June.  Depositors and creditors lost 30% of their deposits in the process.

Put another way, nearly 30% of their money is GONE.

The Chinese banking authorities are attempting to piece the system back together, but it’s not working. The duress has yet to spill over into the Chinese stock market, but on Friday interbank lending in the mainland temporarily spiked to 1,000%, meaning a large bank was willing to pay ANYTHING in order to get access to capital.

This is EXTREMELY similar to what happened to the US credit markets n 2008.

3)   The Everything Bubble has burst.

The Fed is trying to get yields back into this downtrend. But it’s not going well. The yield temporarily broke back below the downtrend last month, but is beginning to bounce again. 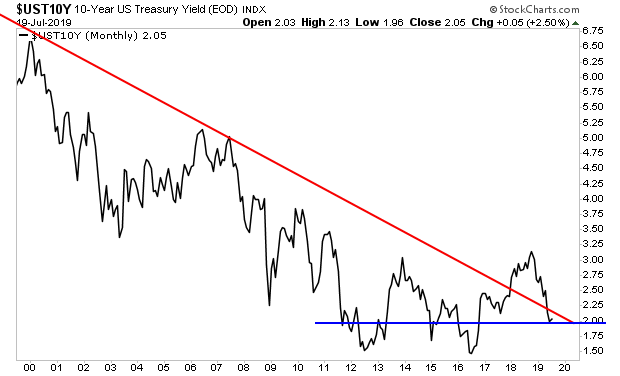 If the Fed cannot get this situation under control, there’s $555 trillion in derivatives at stake. Yes, TRILLION with a T.

Something BIG is coming and the Fed knows it.

Now we do too…