The dirty little secret is that China is running a massive US dollar shortage both on a corporate and a national level.

All told, Chinese companies have roughly $2 trillion US dollar-denominated in debt owed to international investors.

Because this debt is denominated in US dollars, this means the companies need to pay both the principal AND the interest payments to their lenders in US dollars.

However, China cannot print US dollars. Which means these firms either need to sell assets for US dollars or go bust.

That process has already begun on a corporate level.

Unbeknownst to most investors, China had its first major bank failure in 20 years earlier this year. On top of this, as of mid-July, Chinese firms have defaulted on nearly $5 billion in debt this year, which exceeds the previous FULL YEAR record set in 2016.

At some point this situation will come to a head. When it does, China will forced to sell its FX reserves (some $3 trillion) to get access to US dollars to help prop up systemically important firms.

This is what the stock market has been seeing for the last 12 months. It’s why stocks are struggling to hit new highs, despite the Fed cutting rates for the first time since 2008. 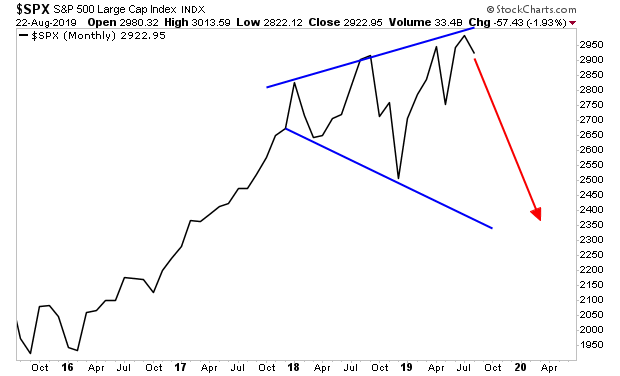 THAT is the ultimate End Game here. The second largest economy, China, in the world is on the verge of massive devaluation.